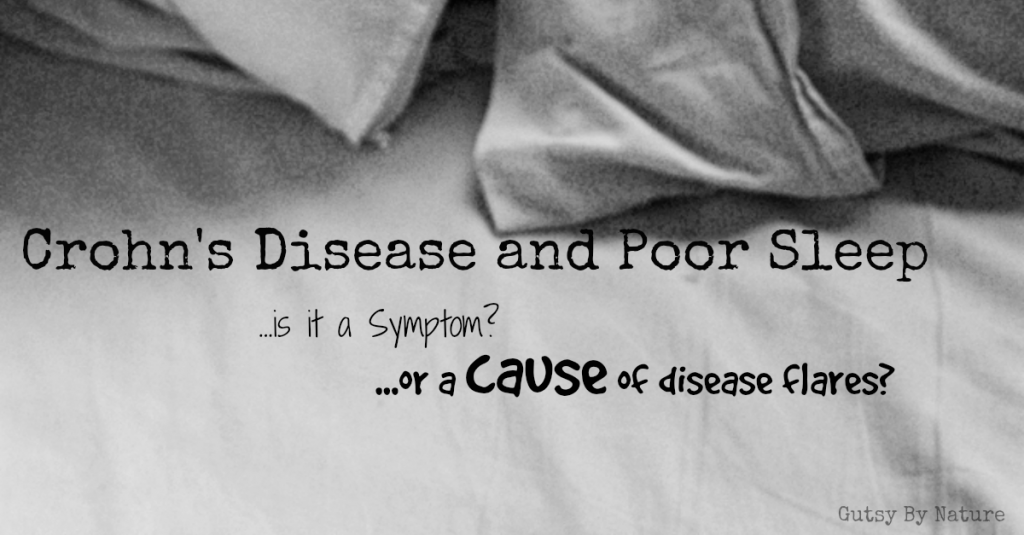 Disturbed sleep and active Crohn’s disease go hand-in-hand, which is probably not a surprise to anyone who has experienced the pain, diarrhea, cramping, night sweats, general malaise, and other agony of a flare. Added to that, the steroids that are often prescribed to calm a flare down have the often unwelcome side effect of causing insomnia. Common sense alone will tell us that lack of rest contributes to poor health and likely causes a vicious cycle of compounding problems that makes it even more difficult to recover from a flare, and scientific studies like this one published in 2011 in the journal Gut support the connection.

As someone who has lived with Crohn’s disease for over 20 years, I definitely concur. I can recall times of disease flare up when I woke up not just once during the night to rush to the restroom, but as many as four or five times. Sheer exhaustion would cause me to fall back asleep in between trips to the toilet, but it was never refreshing and I started the day feeling already fatigued. On my worst days, I would set my morning alarm clock with an hour of buffer time so that after my shower I could lay back down and rest before going to work. That would go on for many days, even weeks in a row… I think back at that now and am amazed that I did it.

Today I am grateful that my Crohn’s disease is much less active, thanks in large part to the real food diet I eat along with advanced medication, and I typically do not have severe gastrointestinal issues that cause sleepless nights. On the contrary, I have been feeling for a while that the inverse is more common. That is, poor sleep seems to lead to what I call “mini-flares” – a day or two of overt symptoms that I can’t attribute to any other cause.

Turns out that I am not alone. A study published in Clinical Gastroenterology and Hepatology in 2013 found that patients with Crohn’s disease in remission who reported sleep disturbances were more likely to experience active disease or disease flares in than those who did not. This was a major study and included over 3,000 patients with diagnosed inflammatory bowel disease (IBD). Of the 1,291 participants who were identified as having Crohn’s disease that was in remission, 50 percent still reported sleep disturbances (is it just me, or does that seem like a huge portion for people who are supposedly not having major health problems?). Then they followed these individuals who had sleep disturbances for the next six months and found a two-fold increase in the likelihood they would experience a flare of their disease over the individuals who had been sleeping well.

A correlation was not found for individuals with ulcerative colitis, but the same authors later did a prospective review of the Nurses Health Study and discovered a U-shaped relationship between sleep and developing the condition. Specifically, they saw that less than six hours of sleep per day and more than nine hours of sleep per day are each associated with an increased risk of ulcerative colitis.

So what’s the deal? Is poor sleep just another symptom of IBD? Is it merely an early indicator that a flare is coming? Or are the sleep disturbances caused by something else altogether and the cumulative effect of lack of restorative sleep causes the body to react with an autoimmune disease flare? There is definitely some evidence for that, including this experiment that focuses on lupus, which is also an autoimmune disease, and found that sleep deprivation positively contributed to an earlier onset of the disease.

And then there is the million dollar question… With this knowledge, can we do anything to prevent disease flares?

I’d like to think the answer could be yes, so I am doing everything in my power, both during periods of remission and when I am experiencing symptoms of Crohn’s disease, to prioritize and maximize my sleep.

What I do to make the most of sleep

That seems like obvious advice, but it is the one tip that has helped me the most. There is no shame in being in your jammies and tucked under the covers at an early hour! My husband gets up to get ready for work at 5AM and my internal body clock seems to want me up early too, so I just go with it. If I want the possibility of 8 hours of sleep, then the math says I need to be in bed at 9PM and ready to close my eyes.

Tip #2: Prepare for bed ahead of time

Sometimes I’m tired and my eyes are ready to close at 9PM, but not if I’ve been stimulating my body and/or brain in the hour before. That means that starting at 8PM, or even earlier if I am feeling fatigued or my body is just telling me to slow down, I need to turn off my devices, change into my comfortable sleeping clothes, and start to unwind.

Tip #3: Watch out for light exposure

I don’t watch a lot of TV in the evening, but many nights I do work on my computer after dark, and I don’t want to give that up, so I have installed the free program f.lux on my MacBook. It automatically adjusts the screen to match the time of day instead of being bright like the sun all the time. Another option is to wear  amber glasses such as these

for an hour or so before bed. They filter out the artificial lights of home and mimic what our pre-industrial ancestors would have experienced. Personally, I find them too annoying and haven’t really noticed any difference in the quality of my sleep when I do bother to put up with the annoyance, but I know a lot of people swear by them.

Melatonin is a hormone that our body should produce naturally and supplements can help with insomnia. Additionally, there is some evidence, including this study from Russia, that supplemental melatonin may be beneficial for colonic mucosal healing in patients with Crohn’s disease. However, there is also at least one study that found melatonin supplements could trigger Crohn’s disease, so definitely use it cautiously and as always, be sure to discuss starting or stopping any supplements or medications with your medical care providers.

Another supplement to consider is magnesium. Dr. Mark Hyman says that it is the “most powerful relaxation mineral available” and that up to half of all Americans are deficient in it, due in large part to the poor quality of our food supply, and people with Crohn’s disease are particularly likely to have low magnesium due to damage to the gastrointestinal mucosal surface and electrolyte imbalance from diarrhea. You can take an oral supplement, such as Natural Vitality Natural Calm

, but if your absorption is impaired due to active disease it may not help very much. The cool thing about magnesium is that it is also absorbed through your skin and an easy and enjoyable way to get it is through Epsom salt baths

. These also have the additional benefit of being relaxing, which can help as you unwind for sleep in the evening, although I find that I need to do it at least a couple hours before bedtime so that my body has time to cool back down for sleep.

Statistics on www.schlaf.guru show that, if you have a family, it will help immensely if you have them on board with your plan to get better sleep. My husband and I have an agreement that 9PM is my “lights off” time on weekdays so if he is wrapped up in a TV show or just not ready to go to bed that he will go to another room and try to be as quiet as possible when he joins me in bed later. Young children add another wrinkle, of course, and I realize there is no easy solution to their night time needs, but they too will benefit from the entire household taking sleep seriously.

You can also extend your support network beyond your household, thanks to the power of social media! Sarah Ballantyne, also known as The Paleo Mom, has a new ebook and program focused on sleep that includes a 14 day challenge with specific tips, daily support emails, and access to a community of other people working on improving their sleep at the same time. I’ll be honest… I’ve resisted joining because I have a rebel streak in me and don’t like being told what to do, but as I am primarily a questioner (that’s a reference to Gretchen Rubin’s habit tendencies, if you didn’t know!) I do like rules and routines once I understand the reasoning behind them, and Sarah has me convinced with the science behind her program! Therefore, I’m going to start day one with the next group and will document my experiences on Instagram and report back here after I’m done.

Click here to learn more about the ebook and the 14-day challenge. The $19.99 is money well spent as an investment in your health. One of the great things about it being an ebook is that Dr. Ballantyne will continue to update it as new research is done into sleep. I’ve already received one update since my initial purchase and I know that she is a stickler for being up on the current science, so I’m expecting many more updates. 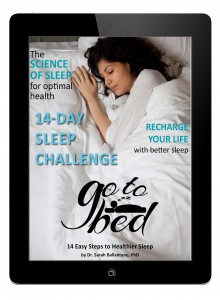 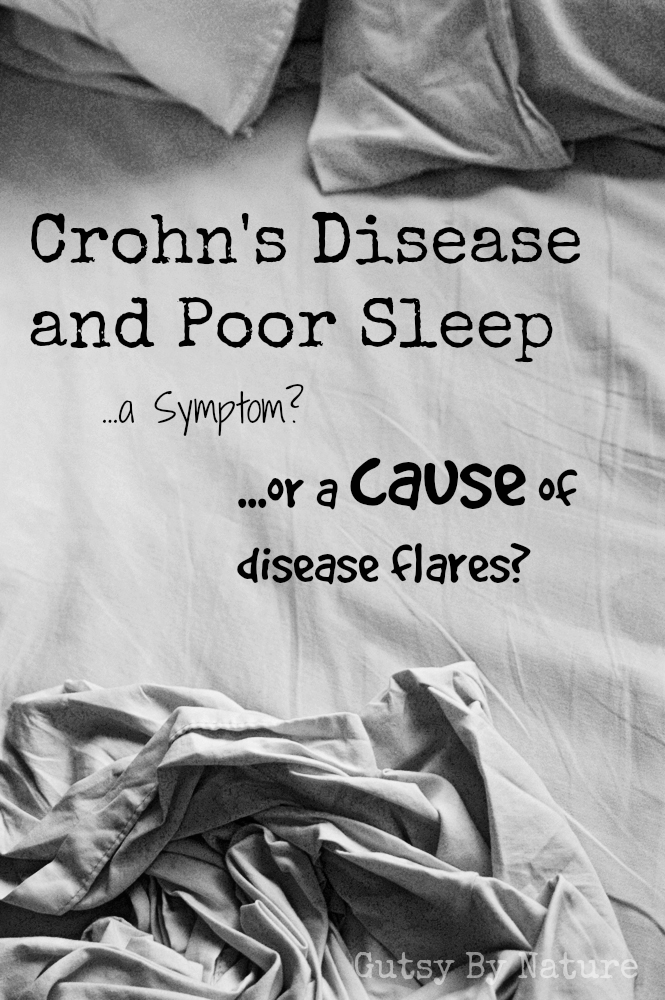 One reply on “Crohn’s Disease and Poor Sleep: Symptom or Cause?”

Great reminders, thank you! (As I read this from my Epsom salt bath…) 🙂 Interstingly, my integrative doc steered me away from the magnesium citrate I’d been using (Natural Calm) and toward other forms of magnesium that are less likely to irritate the gut lining. It’s been a couple months, and I think it’s helped! But sleep is always so essential. This science-based reminder of how it’s extra-extra essential for Crohnies will surely get me to bed early tonight.

Oh, side note for iPhone users: when iOS 9.3 comes out, it’s rumored to have f.lux-like capabilities to help dim blue light at night. Can’t wait!