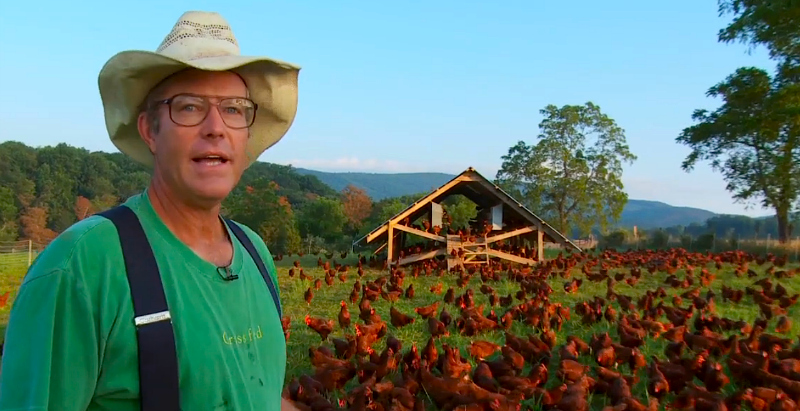 My life was quite literally falling apart in the spring of 2007. I was newly married and very much in love, but our fairy tale life had become a nightmare after I underwent bowel surgery for Crohn’s disease. Instead of the simple recovery and return to normal life I had been told to expect by my doctors, I suffered complications that lead to emergency surgery, sepsis, weeks in an ICU, and a very long and slow recovery over the months and years to follow. Somewhere during that time a friend gave me a book that first started changing my thoughts about food, agriculture, and the environment and lead to the eventual changes in my way of eating that have finally returned me to health.

The book was The Omnivore’s Dilemma by Michael Pollan and it was my very first introduction to Joel Salatin.

Salatin appear in Pollan’s book as a breath of fresh air, a glimmer of possibility and hope after we are introduced to his polar opposite – a farmer raising commodity crops (corn, mainly) using hard core fertilizers and pesticides and destroying both the health of the land and the health of the people who eat the food produced in the conventional modern agriculture system. In contrast, we learn that Pollan is first and foremost a “grass farmer” who uses rotational grazing that mimics what would happen in nature were we humans not interfering to actually heal the land and create food that is healthy for us to consume.

As he describes to Pollan the theory behind his trademark Eggmobiles, Pollan said: “In nature you’ll always find birds following herbivores. The egret perched on the rhino’s nose, the pheasant and turkeys trailing after the bison — that’s a symbiotic relationship we’re trying to imitate. To mimic this symbiosis on a domestic scale, we follow the cattle in rotation with the Eggmobile.”

This symbiotic approach turned the previously worn out, eroded, and abused Salatin family farm in Virginia into what is now the thriving, healthy, and highly productive Polyface Farm that services over 5,000 families, 10 retail outlets, and 50 restaurants with grass fed beef, pastured poultry and pork, and forestry products. It was the first time I had ever heard of approach like this and it riveted me.

In the pages of Pollan’s narrative, I saw myself. Like the farm Joel’s father purchased, my body was worn out, eroded, and abused. Modern medicine had not delivered the cure it promised, but instead had left me far worse off than before the surgeon’s scalpel made its first cut. Reading about the land being healed by natural practices gave me hope that I too might return to health.

Of course, regular readers of this blog know that I didn’t suddenly become transformed in 2007 after my first exposure to Joel Salatin and the concepts he described. I had 6 more surgeries, tried two more strong medications, and spent another five years waiting and hoping for a miracle to drop out of the sky. But the seed had been planted and it simply needed to be nourished by nature.

Today my body (and my spirit too!) is thriving, healthy, and highly productive – just like Polyface Farm, which we also have the privilege of getting our meat and eggs from through the metropolitan buyer’s clubs in the Washington DC area. How I got to that point is a story for another day, but I trace the beginning of my transformation back to that book and to the story of Joel Salatin.

That’s why I was so excited when I found out that Salatin was going to be a featured speaker in the upcoming New Year New You Online Virtual Conference, sponsored by the Village Green Network, and that he was going to talk about the future of real food. I’m told that he takes an optimistic angle and argues that his style of grass farming will save the planet, which is refreshing to hear at a time when it seems we are bombarded with stories of doom and gloom.

You can listen to Salatin’s presentation for free by tuning in on Monday, January 20, 2014, along with 30 other presentations from real food and natural living leaders. All you need to do is click here and register for free access to the daily feed.

Can’t tune in on January 20? Or maybe you want the freedom to listen to Salatin’s presentation and the 30 others on your own schedule and on any device… In that case, you can purchase an all access downloadable package of all the recordings for just $99. Even better… if you preorder BEFORE the conference starts, you’ll get a 50% discount. That brings the package cost down to just $49, which is less than $2 per presentation. All you need to do is click here and select “preorder.”

UPDATE: Just announced! If you preorder now, you will also receive last year’s Healthy Life Summit package for free! That ends up being over 60 hours of content for just $49.

I don’t know about you, but I always hear about these summits and think I’m going to listen to them in real time but then life interferes and I miss ones I was really looking forward to. Then I’m kicking myself for not preordering and getting the discount! Now I have learned my lesson and just do the preorder option right away. That way I can listen to the interviews on my phone when I’m on the go. (Please note that by ordering through my page, I do get a small commission for referring you. That helps me pay my blogging related expenses and keep my mission of sharing the healing message far and wide. Your support would be deeply appreciated!).

I hope you’ll take advantage of this great opportunity and look forward to hearing your thoughts after the presentation airs!