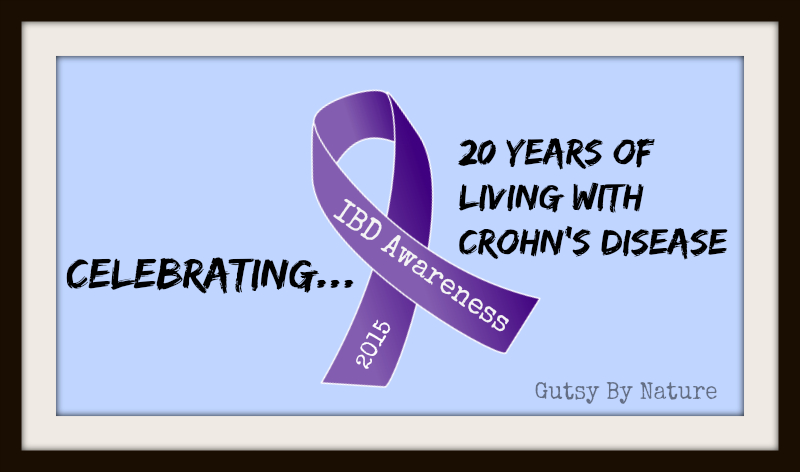 The first week in December is IBD Awareness Week and this year I am celebrating the fact that I have lived with Crohn’s disease for 20 years now. Yes, you read that correctly. I am CELEBRATING. Usually disease awareness campaigns are all about making people who don’t know anything about the illness aware of how terrible it is, about how much people who have it are suffering, about how badly we need a cure. But I’m going to leave that part of the campaign to others. Instead, I am focusing my awareness efforts on the people who already know all of that… other people who have been diagnosed with an inflammatory bowel disease.

No one needs to tell us that this is a nasty disease. We know that from our own experience that IBD means more than just an “upset tummy” and frequent trips to the toilet. We know it can mean agonizing pain, hospitalizations, surgery, medications, and extra-intestinal complications like anemia, malnourishment, dehydration, joint pain, skin ulcerations, and more. Although our experiences may vary, we share the frustration that the medical community still hasn’t figured out these diseases and we want a cure, or at least more effective treatments.

I was diagnosed with Crohn’s disease in summer of 1995, just before I turned 20. I had been having symptoms that were more annoying than debilitating for about a year, and was relieved to have a name and explanation for the embarrassing problems I was having. My doctor prescribed sulfasalazine and metronidazole, which helped enough that I didn’t need anything stronger until a couple years later when I was in my early 20s and had started my first full time job teaching high school English. At that point I did my first round of prednisone and started immunosuppressants and moved to Remicade (infliximab) shortly after it was approved in the late 1990s. That seemed to work well, though I didn’t realize that I was slowly developing scar tissue in both my sigmoid colon and ileocecal valve and in 2006 was told that I needed to seriously consider surgery soon to deal with the strictures that had developed and threatened to become intestinal blockages that would need emergency surgery. I elected to have that surgery in 2007, but I had life threatening complications that led to additional surgeries, which I have written about previously.

My life with Crohn’s has not been easy, especially since that surgery in 2007, and there are some dreams that I have had to modify or give up completely, but I have chosen to focus on the positive rather than dwell on the negative. On Instagram this week I shared this photo collage of just some of the things I have done since that diagnosis 20 years ago…

And this picture just shows the things you can photograph, which is only part of the story! In addition to earning multiple degrees, traveling the world, and getting married, I also work full time in a rewarding profession, have become a certified yoga teacher, and am up for any adventure you can throw my way. Like my friend Martine says, “I have Crohn’s. It doesn’t have me.”

The primary emotion I remember from the first decade of my life with Crohn’s was feeling completely alone. I didn’t know anyone else in real life with my diagnosis and the virtual support networks that exist today were in their infancy or didn’t exist at all. The only stories I did find on the internet seemed to be worst case scenarios and were far more scary than helpful.

Thankfully, the world is different now! Blogs and social media allow us to share our stories and find information about the many different ways we can manage IBD, including through diet and lifestyle – either in lieu of or in tandem with conventional medications. The best part is that people are sharing their healing stories, proving that an IBD diagnosis doesn’t preclude living a full and happy life, which I wish I had had when I was newly diagnosed.

If you or someone you love has been diagnosed with an IBD, I highly recommend following these blogs. They don’t all share the same approach to managing IBD (some are “paleo” bloggers, others are not) but they all share one thing – a positive attitude and an inspiring story!

Know others? Please let me know in the comments! 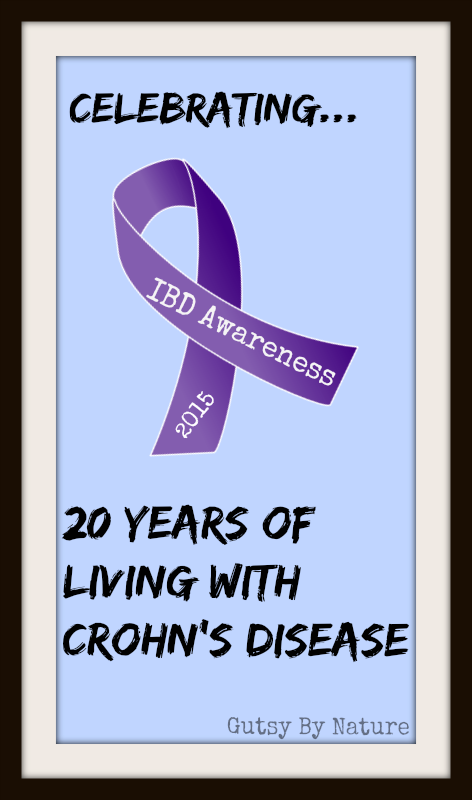 I don’t know any other websites I just wanted to say thank you for your positivity. My daughter who is 13 was just told she has crohn’s and I am beside myself. Her symptoms have been mild and I want to attack this disease with the right diet which I have already started but I am afraid if I don’t put her on medicine things could get worse. I’m anti medicine on a normal day. Sorry just ranting. Do you manage your chrohn’s now without medication? Again…thank you for this website and the other suggestions. I needed to read this!!!

I’m sorry to hear of your daughter’s diagnosis, especially at such a young age. It was difficult enough to cope with when I was 19, but I can’t imagine how much harder it would have been if I was still going through all the tribulations of middle and high school. The good news is that because she is so young and therefore her body hasn’t been sick for decades like so many of my clients have been before they start, she is likely to respond very well to diet changes. Remember that every cell in her body WANTS to heal! It is its natural state, after all!

Regarding medication… I think it is important to not be “anti” anything and instead think of it as “pro” whatever tool will provide the most benefit with the least harm. Are you familiar with Phoenix Helix’s website and podcast? If not, I encourage you to check it out. You might be particularly interested in this episode to start with: https://www.phoenixhelix.com/2016/07/03/episode-48-medication-decisions/

[…] I have written a few posts over the years marking this topic (like this one from 2015, which marked 20 years since I was diagnosed) and do some sharing on social media, but I always have mixed feelings about it the whole concept […]

[…] See my post celebrating the first 20 years of living well with Crohn’s disease. […]

[…] See my post celebrating the first 20 years of living well with Crohn’s disease. […]