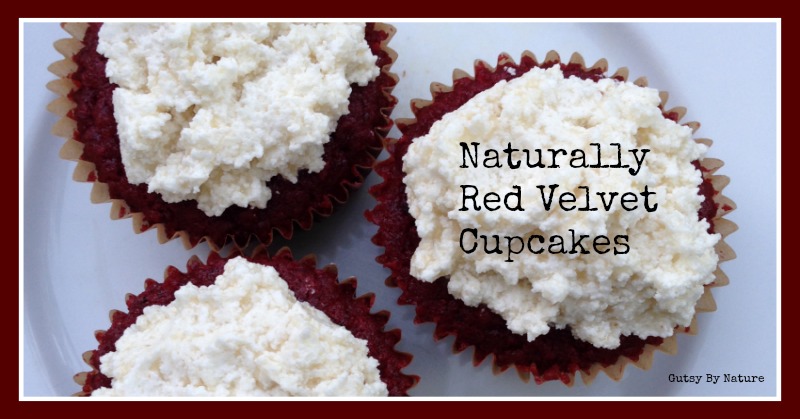 I have never understood the allure of conventional red velvet cupcakes. Don’t people realize that it is just a light chocolate cake with about a bottle of artificial red food coloring in the batter? When my neighbor gave me three giant beets, I decided to put them to good use in creating a gluten and grain free, dairy free paleo red velvet cupcake that is moist, tasty, and owes its red color to nature rather than a bottle.

I found a few recipes online for paleo red velvet cake, but all of them called for almond flour which I did not want to use since I have not yet reintroduced nuts after following an autoiummune paleo protocol and generally prefer to minimize in my diet anyway due to almond flour’s high omega-6 content. Having had recent success with a pumpkin muffin recipe that used a combination of coconut flour (buy here) and tapioca starch (buy here)

, I decided to use that recipe as a template for these.

My first two attempts were less than satisfactory. The first batch was delicious and velvety, but not much to look at and could charitably be described as “slightly-reddish brown.” Thinking that perhaps the solution was to increase the amount of beets and decrease the amount of chocolate, I tried again and created something you could definitely call red, but tasted a little too much like beets… which even though I am a beet fan, was definitely not the flavor profile I was going for. 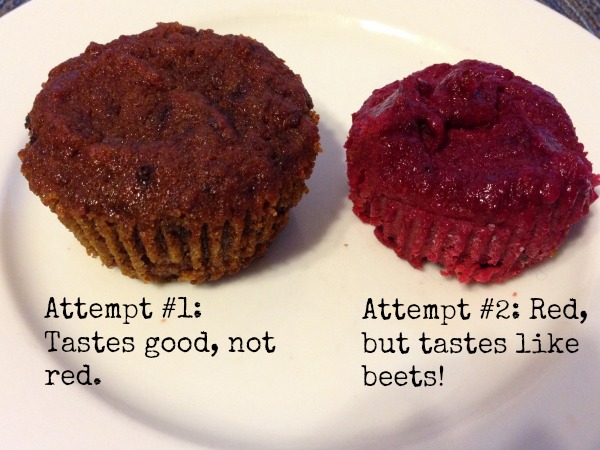 I also found this blog post which showed how playing with the PH level of the ingredients can change the intensity of the red hue, so for the second attempt I also used baking powder instead of baking soda and added two tablespoons of lemon juice to create a less alkaline batter. That seemed to work, but I failed to account for the increased volume of baking powder needed as compared to baking soda and these cupcakes were dense and definitely not very “velvety.” 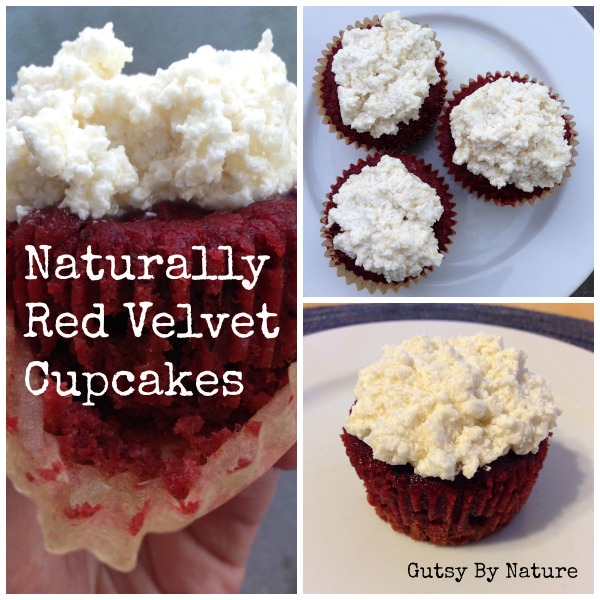 The final challenge is to create a tasty dairy free frosting, which I definitely have not mastered. I used the recipe from the Against All Grain

cookbook but clearly did something wrong as it just never got smooth, no matter how long I whipped it. But the flavor was good so I just decided to go with it.

Delicious gluten and grain free, dairy free, and nut free paleo red velvet cupcakes that get their color from beets rather than a bottle.

[…] Paleo Red Velvet cupcakes ! Colored with you guessed it….. BEETS! Who doesn’t love a good cupcake?! […]

Hello! I can’t believe that no one has commented on this. I’ve made this recipe many times and it is a huge hit with everyone, and I mean everyone. I make buttercream with the cupcakes and they are just incredible. The roots really bring a fantastic earthy flavor that compliments the cocoa well. A crowd pleaser, palettes and tummies alike!

hi, I am wondering if i can use Canned Beetroot instead of fresh ones? Thanks in advance!

Great recipe to try. I am looking forward to this! However, as a true southern girl who has been making my family’s hand-me-down red velvet cake for generations…I must correct your misunderstanding of a true red velvet cake. It is NOT a chocolate cake. As a matter of fact the recipe only calls for 2 teaspoons of cocoa. As a matter of fact, when I request one at places I need only look at it to determine if it a faux red velvet (chocolate cake disguised as red velvet) or a true red velvet in all is Martin Sorceress red! As a child I always wanted my mom to make it without the food coloring so I could see what color it would be, of course she never did so I decided to. It comes out as a very pale… beige. Not chocolate at all. However, I am excited to try this paleo friendly recipe and am glad you have worked out all the kinks. Also on your frosting, to conceal the lack of smoothness I will sprinkle coconut flakes on it!

I’ve made these several times (without frosting). Love’em. They freeze great. Another recipe of yours I’ve made several times is the grain free banana bread. Delish! I’ve had the best luck with your baked recipes.

Oops. I should add that I use maple syrup in place of honey and it is perfection. Only cause I don’t like honey. 🙂 These also freeze great.