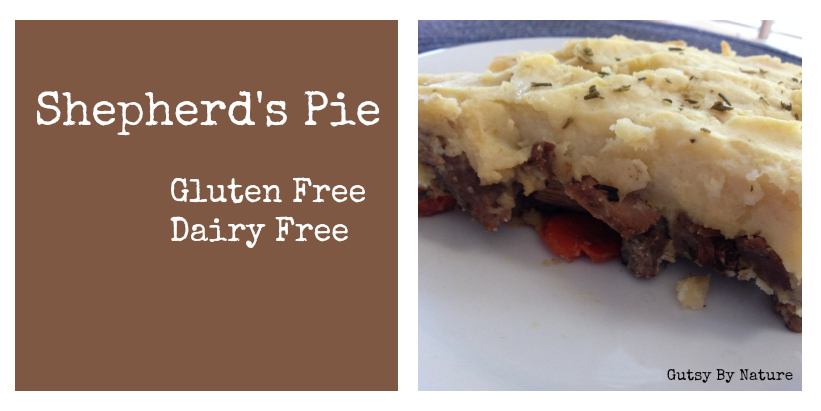 Shepherd’s pie is the epitome of humble food. Hearty meat and gravy, seasonal vegetables, topped with basic mashed potatoes and totally comforting on cool fall days. But it is kind of a pain to make at home… no matter what recipe I consulted, it seemed to have a ton of steps and lead to virtually every cooking vessel I own getting dirty. But I love it, so I used to order it in restaurants whenever I could. Unfortunately, since I’ve gone gluten and dairy free, that is no longer possible as traditional recipes use wheat flour to thicken the gravy and butter and cream in the mashed potato topping. The only solution was to figure out a way to make it at home without the wheat and dairy and simplify the process as much as possible. The result is a delicious gluten free shepherd’s pie that is also dairy free and still delicious!

The best way to simplify meal preparation is to plan for leftovers and repurpose them. Every week I include somewhere in my dinner plans a roast of some kind that I know will provide more servings than we will eat that night and then another meal that dresses those leftovers up differently. Instead of left-overs, they are “planned-overs”!

In this case, the planned-over was roast lamb, so shepherd’s pie, which is often made with ground beef in the United States but traditionally should be made with lamb (hence the name “shepherd”), was a perfect choice. I didn’t eat lamb growing up so it has taken me a little bit to get used to its distinctive taste and I’m still not all that fond of the fattier cuts, but I really enjoyed this recipe for boneless leg of lamb – a cut that we can get from our local Costco at a very reasonable price.

Side note: Lamb is one meat that I’m willing to buy from conventional sources if I can’t find it from a local farmer because even grocery store lamb is usually grass-fed for its entire life, especially lamb imported from New Zealand.

One recipe I consulted used 5 different vessels… a skillet for cooking the meat, another for sauteeing vegetables, a third for the gravy, a pot for the potatoes, and finally the casserole dish or pie plate. I knew this wasn’t going to become a one dish meal, but I still thought I could do better than that!

I still needed a pot for the potatoes and the pie plate in which to bake the assembled dish, but I was determined to combine the other three into a single skillet. The technique I settled on was to first sautee the onions and other vegetables, then sprinkle that with arrowroot powder and add the broth and cook, creating the gravy at the same time. Then I added the already cooked meat to warm through and continue thickening the gravy. In retrospect, I think I let it thicken a little too long because the end result was not quite as gravy-licious as I would have liked. Next time I will reduce the cooking time or increase the amount of broth I add.

Because I don’t eat grains, especially gluten containing ones, and I’m still keeping dairy out of my diet as part of the paleo autoimmune protocol (AIP) I needed to figure out some way to thicken the gravy for the base and make the potato topping taste creamy. My solution for the gravy was to use a small amount of arrowroot starch in some homemade beef broth. Making a dairy free shepherd’s pie is a little trickier. For the creamy potatoes, I started with Yukon gold potatoes which have a naturally buttery taste, used a potato ricer (this is the one I have)

to make them extra smooth, and then mixed in some more beef broth. The other nice thing about using a ricer is that you don’t have to peel the potatoes ahead of time – another step saved!

This is authentic shepherd’s pie but without the gluten or dairy you’ll find in most. And it doesn’t dirty every dish you own in the process of making it!

My version of the paleo diet includes white potatoes. If you do not eat potatoes (they are nightshades and therefore excluded in the introductory phases of the paleo autoimmune protocol), then you could replace them with mashed cauliflower. 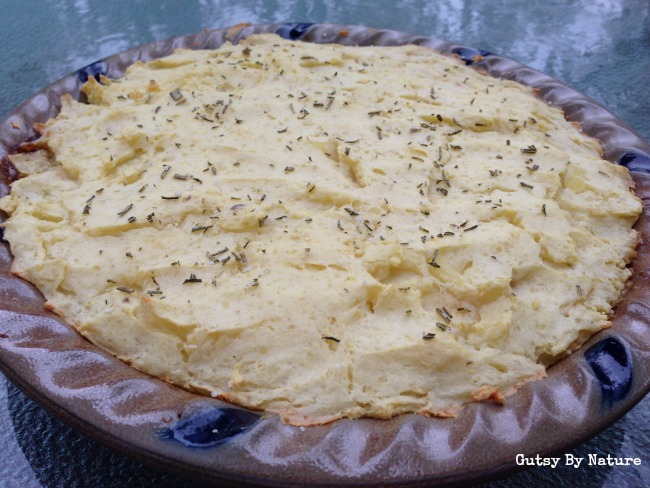 […] – I do have a shepherd’s pie recipe on the blog, but it is not AIP. You could use the filling from that recipe and the topping from this one to […]

[…] you’ll have leftovers for at least a couple more meals (a perfect excuse to make comforting shepherd’s pie, […]

This has been a family favorite. I like that you don’t use a lot of extra seasonings and additions like tomato paste and Worcester sauce or whatnot and it’s simple and amazing. I included celeriac for the flavor and excluded the mushrooms. I didn’t use left over meat so I had to use another dish to put the meat in while I cooked the veggies but instead of a pie pan I used the cast-iron skillet to bake the pie at the end. So that saves a dish. Thanks for my new favorite shepherd’s pie (cottage) recipe. I would use cottage pie but nobody knows what I’m talking about when I say that. lol