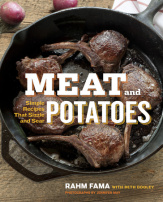 Have you heard? Potatoes are totally paleo now! So when I saw this new cookbook titled “Meat and Potatoes,” I knew I had to check it out. Potatoes are a key part of my personalized paleo diet, especially since discovering that I really feel my best when I increase my intake of healthy starches. I hoped this cookbook would give me some new ideas for creative ways to create basic meals and was betting that many recipes would fit right into my eating template, with minor modifications.

I was mostly right. The book is organized by the meat recipes and each meat recipe is presented as a complete meal with two sides: one “potato” (or some other starch) and one vegetable. I like this because I often find a tasty new recipe and wonder what would “go” with it. Not having a well developed repertoire of side dishes yet in my foodie tool belt, I often find myself repeating the same boring side dishes over and over. This book solves that problem!

The recipes are easy, un-fussy every day foods. The author, Rahm Fama, makes good use of a cast iron skillet throughout, which I like very much. However, I am disappointed that each of the meals are not presented with a cooking plan. He always lists the meat first and then the sides, but if you prepped in that order your meal would rarely end up on the table together. For example, the pan-seared lamb loin (p. 169) is cooked on the stovetop and takes 20 minutes. The horseradish potato gratin and spaghetti squash with basil and almonds that go with it both roast in the oven, but for differing times. A smart cook who reads all of the directions and works backward will know to start the gratin first, then put the squash in 30 minutes later, and then start cooking the lamb loin. But wouldn’t it be nice if Fama or his co-author Beth Dooley had mapped that out for us?

So is it paleo?

A lot of the recipes are grain free, though you will see things like breaded pork chops and battered fried chicken. Many of the sides are also grain free, though there are several rice dishes, some pasta, and a couple polenta or corn-containing sides to avoid. Many recipes use cream and cheese, so my ultimate recommendation would be that this may be appropriate for primal eaters who also eat rice. If you are strict paleo or mostly avoid dairy, you would probably be frustrated with how many of the recipes don’t work for you.

Another negative is that the recipes are designed for and presumably tested on conventionally raised meats and not the healthy grassfed meats most paleo try to consume. If you are looking for a good cookbook that will guide you through the intricacies of making grassfed delicious and provide creative recipe ideas, I strongly recommend Bruce Aidell’s The Great Meat Cookbook or Lynne Curry’s Pure Beef. Neither of these are paleo either, but I have found them to be invaluable resources anyway as I’ve learned how to cook different cuts and get more comfortable developing my own recipes.

I like it for recipe inspiration (what “goes with what”) but probably won’t cook out of it very much. It is a nice looking cookbook though and the one recipe I did try from it (pork adovada) turned out deliciously, so I would recommend it to people who eat a more standard diet.

Please note: I received this book from Blogging for Books for this review.