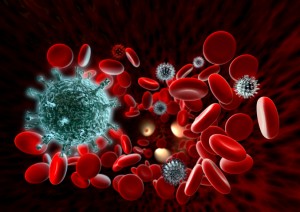 Autoimmunity is a complex subject, even for medical people and scientists (which I am most definitely not!). It can affect pretty much any body system, is difficult to diagnose, and its causes appear to be multi-faceted. And even though various autoimmune disorders often overlap with one another, they are each treated in the Western medicine by separate specialists who focus on body systems, such as gastroenterologists, dermatologists, endocrinologists, rheumatologists, etc. There are no real experts in general autoimmune disorders and few researchers* are looking at autoimmunity from a global perspective, which only furthers the confusion and knowledge gap about these mysterious ailments.

*The one exception I have stumbled across is the Autoimmune Disease Research Center at Johns Hopkins University. Formed in 1999, the Center creates the opportunity for scientists, clinicians, epidemiologists, and genetics from departments throughout the Johns Hopkins Schools of Medicine and Public Health to come together conduct research on autoimmune diseases, establish communication among investigators and clinicians, and enhance study of autoimmune diseases in the medical school curriculum.

This post provides answers to some of the most basic questions about autoimmunity and autoimmune disorders.

Simply put, it is your immune system turning against and attempting to destroy particular cells and tissue in your body. The immune system does this because it fails to recognize these parts of your body as “self” and instead interprets them to be foreign invaders. Think of it like “friendly fire”; a deadly case of mistaken identity.

Interestingly, some degree of autoimmunity is actually a positive thing for your body to have. Evidence suggests it helps reduce the incidence of cancer and that it helps the immune system stay conditioned and ready for real infections, similar to how young animals will play-fight to prepare for future battles. The problem occurs when the immune system fails to modulate this response.

What parts of the body are affected by autoimmune disorders? 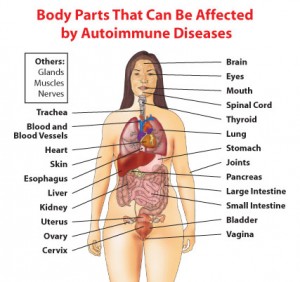 Some autoimmune disorders are organ specific, meaning the malfunctioning autoimmune system attacks a particular organ. Examples include Hashimoto’s thyroiditis (thyroid gland), Addison’s disease (adrenal glands), and type 1 diabetes (pancreas). Other autoimmune disorders are non-organ specific and instead the activity is spread throughout the body. Examples include rheumatoid arthritis and lupus. Of the inflammatory bowel diseases (IBD), ulcerative colitis is an organ specific disorder (colon) while Crohn’s disease is a bit of a cross between the two, because it can affect any part of the digestive tract, from mouth to anus.

Which diseases are considered autoimmune? 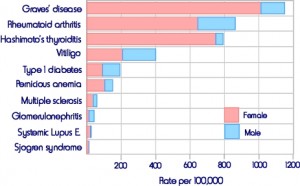 How many people are affected by autoimmune diseases?

In the United States, it is estimated that anywhere from 10 million to 50 million people suffer from an autoimmune disease (numbers vary depending on which disease are included and the criteria used). That is as much as 20% of the population. More than 75% of these people are women.

Why does the paleo autoimmune protocol help treat autoimmune disorders?

Research by Alessio Fasana, MD of the University of Maryland and others** indicates intestinal permeability is involved in autoimmune diseases. “Intestinal permeability” (also known as “leaky gut”) occurs when normally tight junctures in the gut wall don’t work properly and let substances leak into the bloodstream.

**For more details, I recommend reading this article Dr. Fasano wrote for Scientific American in 2009. (The website requires you to be a subscriber or purchase access, but I was able to get a copy through my public library at no charge.) Although it is specifically about Dr. Fasano’s area of speciality, celiac disease, the findings are applicable to autoimmunity in general and other autoimmune diseases.

Research also indicates that “gut dysbiosis” is also associated with autoimmune diseases. Dysbiosis refers to an imbalance in the flora that resides in the digestive tract, such as an overgrowth of normal types of bacteria or an imbalance between the “good” and “bad” types.

Although we don’t know exactly what causes intestinal permeability or gut dysbiosis, there is strong evidence that a standard American diet contributes to it.

So quite simply, the paleo diet with autoimmune modifications (commonly known as the “autoimmune protocol” or AIP) removes substances that irritate the gut, trigger permeability, and induce inflammation. This includes grains, legumes, dairy, eggs, nuts, seeds, and nightshades. After a period of time, many people are able to add back in some of these items, although they may need to be cautious of the amount and type they eat.

The diet is also nutrient rich to account for what is often years of poor nutrition and impaired absorption of nutrients from long term damage to the gut lining. It also helps to correct gut dysbiosis by promoting the growth of healthy bacteria.

Sarah Ballantyne, who blogs as The Paleo Mom, does a fantastic job of explaining all of this science in a way that is accessible to non-scientists like me. She has a book coming out in October 2013, The Paleo Approach: Reverse Autoimmune Disease, Heal Your Body

, that I am sure will be an outstanding comprehensive resource to the diet, the science behind it, and how to implement it.

Why didn’t my doctor tell me to change my diet when I was diagnosed with an autoimmune disease?

Dietary factors are not universally accepted by medical doctors (MDs) and many do not counsel their patients to consider them. MDs are trained to look for pharmacological solutions and tend to focus their treatment on the prescription pad. Even many doctors who do see a dietary connection think restrictive diets like AIP are not practical and patients won’t adhere to them anyway, so they never mention them.

Unfortunately, this means that a lot of people suffering from autoimmune diseases will never hear about or consider trying this approach to managing their health. In the nearly two decades since I was diagnosed with Crohn’s disease, not a single doctor has suggested I look to my diet. I found it on my own, and only after surgery and years of medication alone failed to make me well. I’m still very early in my journey and know that this diet is probably not curing my disease, but just putting it into remission and that it could flare up again at some point. But all of that has always been true about the medications I was prescribed also.

All I know is this: I feel about 100 times better since I cut out the potentially problematic foods. While I hope to add back in some of the AIP-restricted foods like eggs, nuts, seeds, nightshades, and maybe some grass-fed butter at some point, you COULD NOT PAY ME enough to go back to eating gluten, refined sugar, processed foods, or other Standard American Diet (SAD) foods.