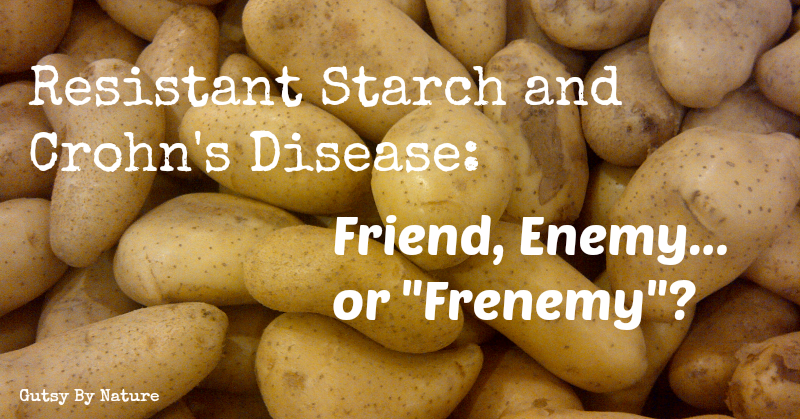 Once upon a time in a not too distant past, the phrase “paleo diet” was synonymous with “low carb.” Along with grains, starchy tubers were shunned and consumption of fruit was to be minimized. That perspective started changing in 2010 when Paul and Shou-Ching Jaminet began publicizing their Perfect Health Diet (later published as a book with the same title in 2012) that included within its recommendations for optimal health that one should eat about a pound of so-called “safe starches” (white rice, potatoes, sweet potatoes, taro, and winter squashes) and up to another pound of sugar plants (fruits, berries, beets, carrots, etc.) every day.  Much debate ensued within the paleo community, including a “safe starch” panel at the Ancestral Health Symposium in 2012.

Now the buzz is all about “resistant starch.” I was particularly intrigued when I heard that it might have benefit for people with Crohn’s disease, ulcerative colitis, and other bowel ailments. But at the same time I was quite conflicted, because this completely contradicts the Specific Carbohydrate Diet (SCD), which has brought healing to so many. So, which is it? Is resistant starch a the missing link for natural gut healing? Or is it a dangerous substance that will only inflame the vicious cycle of bowel disease? Or could it be both?

Before we look at those questions, lets cover a few basics first.

What is resistant starch?

Resistant starch is a starch that is not digested in the upper part of the digestive tract and instead passes through to the colon for fermentation by the microbes that naturally live there. In other words, it is not food for you but it is food for your gut flora – referred to as a “prebiotic.”

What are the health benefits of resistant starch?

The most common reason people in the paleo community today are talking about resistant starch is its seemingly magical ability to regulate insulin sensitivity, even in people with type 1 diabetes.

For colon health, resistant starch promotes greater production of the short chain fatty acid butyrate, which is the primary energy source for colonic cells. In small studies, supplementation with butyrate has been found to be beneficial for mild to moderate Crohn’s disease and greater production of butyrate is associated with decreased incidences of colon cancer. If butyrate is a by product of the fermentation of resistant starch by your gut flora and butyrate has healing properties in the colon, then the logic works.

Is resistant starch good for everyone with Crohn’s disease?

If you are a believer in the science behind the Specific Carbohydrate Diet (SCD), then you don’t buy this idea at all and would classify resistant starch as the enemy of a person with Crohn’s disease. This perspective says that the starch feeds not only the so-called “good” bacteria, but also the harmful bacteria that is over-growing in a vicious cycle of inflammation.

The answer to the friend or enemy question is probably that it plays both roles, depending on the current state of one’s gut flora. If it is overgrown or out of balance, then it is very possible that resistant starch will make that state worse. But if the imbalance tilts in the other direction, then perhaps providing food for beneficial bacteria is just what is needed.

When I transitioned off SCD and onto the paleo autoimmune protocol (AIP), I had a dramatic improvement in my bowel function. I don’t know if that was due to eliminating foods I was eating or the addition of new foods, but I suspected then and at the time that my body needed the starches that I was adding in back in. Now that I am comfortably tolerating white potatoes (which are a nightshade and therefore excluded on AIP), my bowel function is even more improved.

But I still have ups and downs and therefore want to investigate this idea with a personal experiment and am starting to make a conscious effort to take in additional resistant starch.

What are the sources of resistant starch?

Unfortunately, resistant starch is rather hard to find in the modern paleo-style diet because it converts to digestible starch when cooked or allowed to ripen. The best sources are raw potatoes, green bananas, and raw plantains. Our paleo-era ancestors probably ate much more resistant starch than we do because they were eating a wide variety of foraged plant matter in raw form.

So what is a modern-hunter gatherer to do if they don’t want to nosh on a raw potato? Fortunately, there are a couple work arounds. The digestible starch converts back to resistant starch after cooking if it is allowed to cool, so one easy way to get it is to eat cooked and cooled white potatoes, such as in this salad from Real Food Kosher.

Another popular option is to supplement with unmodified potato starch, which you can purchase at your local health food store or online here.  It is suggested that you start slowly, with just a teaspoon or two dissolved in water and work your way up to a maximum of 4 tablespoons per day. You should expect some increased flatulence as your gut flora adjusts to their new diet, but that should resolve within the first week or two.

I started yesterday with two teaspoons of starch and increased that to a tablespoon this morning. So far I really can’t say I notice any difference, bad or good, but will report back in a couple weeks. 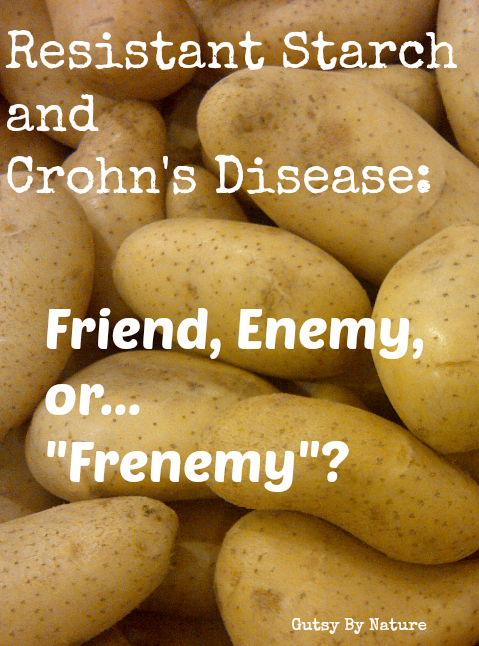 How did your experiment turn out?

Resistant starch does not feed the Bad Bacteria, they consume simple sugars, i.e. Refined sugars and carbs.. Resistant starch is a complex carbohydrate that good probiotics ferment and breakdown to create short chained fatty acids such as Butyrate. Butyrate in turn feeds the intestinal wall creating a stronger network of epithelial cells, I.e. the junctions of villi on the mucousal wall. This also in turn creates an acidic environment killing off the bad bacteria that require an alkaline ph. The Paleo diet in my opinion is a good foundation, but there is a reason why we as a culture and species, have been consuming legumes, grains and nightshades. It is only when we are lacking in resistant starch does it appear these things are bad, maybe without maintenance from RS these foods will cause damage to weak mucousal cells.. Like I said before, RS nourishes and repairs the cells lining the colon.. Just a thought.

Thanks Ron, I was losing a lil hope when I read that. Good to hear your pro-rs

Tiger nuts contain big amount of resistant starch and I read in some sources that they are legal on AIP. Eating them I didn’t notice any bad reactions.