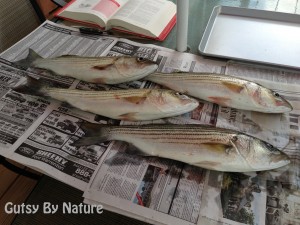 I had to dig deep and find my inner hunter-gatherer this week when my husband brought home four striped bass from a fishing trip with friends. I’ve eaten lots of fish and watched others clean fish, but was completely intimidated by the prospect of scaling, gutting, and cooking a whole fish that had been swimming in the Chesapeake Bay just a couple hours earlier.

As any good hunter-gatherer in the year 2013 would do, I started with Google for some guidance, but after some frustrating YouTube videos I turned to the printed page and found the best directions in Mark Bittman’s How to Cook Everything (you can see my book open for reference in the upper left hand corner of the picture!). 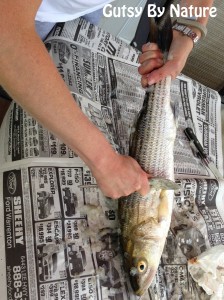 We can agree the first (and messiest) step was to scale the fish. I accomplish this technique using a spoon. Since scales flew everywhere, I did this outside on our balcony and then moved the de-scaled fish indoors to finish the cleaning process so I wouldn’t end up eating any of them. I’ve watched enough Top Chef to know that people react quite badly when you serve them a scale or two!

I was most nervous about gutting the fish, but it wasn’t as gross as I thought it would be. Just a simple cut from throat to tail, and then some serious ripping to get all those organs loosened up and removed. The directions I read suggested they would ooze out, but in fact they were pretty well attached. After that I cut off the fins and then removed the gills… once I figured out exactly what was meant by “gills.” First I tried to remove the outer layer, but then realized that didn’t make much sense. A little more poking around and I discovered the accordion-like pink tissue underneath and found where the bony part of it attached to the body of the fish and snipped it with a scissors.

I gave them a good rinse and then patted myself on the back for a job well done! (And then I cleaned up the tremendous mess I had made and scrubbed myself from head to toe in attempt to get rid of the fishy smell that seemed to have penetrated my pores.)

Three of the fish went into the freezer, but I roasted one of them on a bed of herbs, onions, and lemons, loosely following a recipe from Alton Brown. 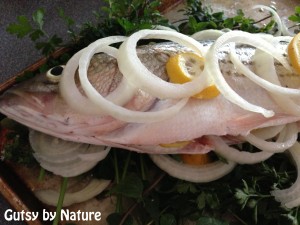 I made a bed of mixed herbs from our herb garden, sliced some onions and two lemons, and used melted coconut oil instead of the olive oil in the original recipe. I also tucked some of the herbs and aromatics inside the fish. Then piled the remaining herbs and aromatics on top of the fish, wrapped it up in aluminum foil, and roasted it in the oven at 500 F for 35 minutes.

You could make this dish with any whole mild tasting white fish.

The end result: I had a delicious AIP-friendly dinner and felt really good about my survival skills!

One reply on “Whole Striped Bass on a Bed of Herbs”