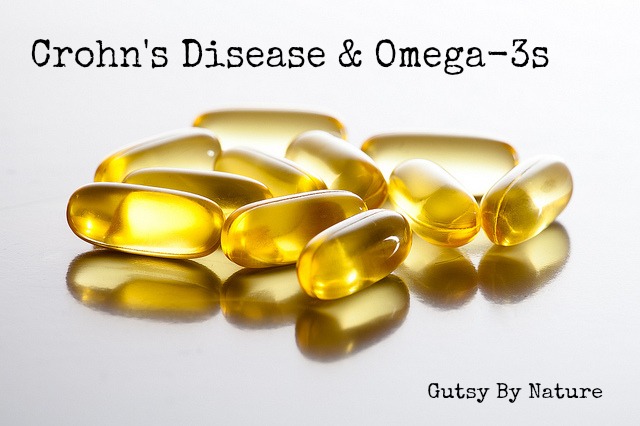 The role of omega-3 fatty acids (that’s the stuff in fish oil pills) in the prevention and treatment Crohn’s disease is definitely not settled, both among conventional physicians and alternative medical providers, so the answer to how much omega-3 we need to be consuming is not easily answered. In fact, a 2013 article in the Journal of Complementary Integrative Medicine reviewed the medical literature on omega-3 fatty acid  supplementation for the treatment of Crohn’s disease and found completely contradictory results. Some studies show that it helps, others found no correlation at all.

But it could be that these researchers are asking the wrong question. Instead of studying whether or not additional omega-3 is useful for preventing, treating, or maintaining remission of Crohn’s disease, they might be better off looking whether or not too much consumption of omega-6 fatty acids is a cause of the disease and how much omega-3 is needed to counteract the negative effects of excess omega-6.

Before we go any farther, let’s take a step back and define what we are talking about. Fat is a confusing topic for most people and there is quite a bit of disagreement between conventional medical providers and those who look at nutrition from an evolutionary perspective about its value in promoting health or role in causing disease.

What do we mean by “saturated” and “unsaturated”?

Fats are compounds of carbon, hydrogen and oxygen atoms that exist in chains of varying lengths, shapes and orders. These varying configurations are broadly labelled as saturated and unsaturated, which refers to how many carbon bonds are paired with hydrogen atoms. When they are all paired up, we call it a “saturated fat.” Saturated fats are found primarily in foods of animal origin and are usually solid at room temperature. Conversely, “unsaturated fats” are found primarily in foods of plant origin and are usually liquid at room temperature. If only one carbon and hydrogen atoms are paired up it is called “monounsaturated” and if there is more than one it is called “polyunsaturated.”

That’s a gross oversimplification, but will do for now. If you want a more in depth explanation, check out this definitive guide to fats from Mark Sisson of Mark’s Daily Apple.

Fat is one of the vital nutrients required by the body for both energy and for the construction and maintenance of various elements in our bodies, such as cell membranes. Both omega-3 and omega-6 fatty acids are polyunsaturated fats (abbreviated as PUFAs). These are “essential” fatty acids, which means that your body needs them but can not create them on its own, so you must consume them through your diet.

Both omega-6 and omega-3 fatty acids come in shorter and longer chain forms. The shorter-chain omega-6 fatty acid known as linoleic acid (LA) is the most prevalent in the standard western diet as it is abundant in corn, sunflower, soybean, and canola oil (which are ubiquitous in modern processed foods). The longer-chain omega-6 fatty acid is arachidonic acid (AA) is found in liver, egg yolks, animal meats and seafood. AA is an important constituent of cell membranes and a material your body uses to make substances that combat infection, regulate inflammation, promote blood clotting, and allow your cells to communicate.

The shorter-chain omega-3 is alpha-linolenic acid (ALA) and is abundant in flaxseed oil, canola oil, English walnuts, and soybean oil. The longer-chain forms of omega-3 are eicosapentaenoic and docosahexaenoic acids (EPA and DHA) and are found mainly in fish, shellfish, and krill. DHA is also found in cod liver oil, fatty fish, and in the organs and fats of land animals. Studies show that due to their anti-inflammatory nature, these two fatty acids may provide benefits to a wide range of diseases, including cancer, asthma, depression, cardiovascular disease, ADHD, and autoimmune diseases, such as Crohn’s disease.

All of these fatty acids are essential nutrients that play many important roles in the body. But the amounts of each that we are consuming today are very different from the composition of the diet our ancestors ate for thousands of years. Even within the last century these amounts have changed dramatically. This paper, published in the American Journal of Clinical Nutrition, reviewed historical data and found that our intake of omega-6 linoleic acid (this is the fatty acid that is predominate in the so-called “heart healthy” oils like canola oil) has increased from just over 2% calories in 1909 to over 7% of calories in 1999. That’s an increase of 213%.

At the same time, consumption of long chain omega-6 and omega-3 fatty acids have decreased, due primarily to the replacement of animal fats with seed oils in our own diets and the increased amounts of grains in the diets of the animals we consume as meat. Therefore, the ratio of omega-6 to omega-3 in our diet has increased from 5.4 to 1 in 1909 to 9.6 to 1 in 2009. Going even further back, anthropological evidence suggests that our hunter-gatherer ancestors consumed these fatty acids in a ratio of 1 to 1.

This is a big deal. We are now eating a ratio of omega-6 to omega-3 fatty acids that is almost 10 times greater than what our ancestors evolved to thrive on!

Although we don’t fully understand the implications of this change, respected alternative medicine practitioner Chris Kresser points out in a post on the topic that those ancestors seem to have been free of modern inflammatory diseases, like heart disease, cancer, and diabetes. What about Crohn’s disease, specifically? An epidemiologic analysis of Crohn’s disease in Japan correlated an increase in the omega-6 and omega-3 ratio from 1966 to 1985 with a corresponding increase in the incidence of diagnosis of the disease.

An action plan for getting your ratio optimized

So if we’ve determined that the problem might be as much about too much omega-6 in our diet, then we realize that taking a fish oil pill is probably not going to fix the problem. In fact, some people even believe that large amounts of fish oil supplements can cause more harm than good because they are highly vulnerable to oxidative damage.

I took a fish oil supplement for a long time, but I no longer do and prefer to work on healing my gut naturally, primarily through diet. After all… I’m gutsy by nature! This is the three-part action plan I follow:

Safflower, sunflower, corn, cottonseed, sesame, peanut, and soybean oils are all very high in omega-6 fatty acids and comparatively low in omega-3 fatty acid. Canola oil has a better ratio, but is still far from optimal and has many other strikes against it. I have banished all of these from my cooking and instead use more natural, traditional fats like coconut oil, butter or ghee from grassfed cows, and lard from pasture-raised pigs (buy quality fats here). Don’t let the fact that these fats are high in saturated fats scare you away; evidence is mounting quickly that they are not the “artery-clogging” devils we were taught they were. Remember that our ancestors ate these fats for generations and were very healthy; the increasing rates of autoimmune and inflammatory diseases like Crohn’s disease directly correlate with these fats falling out of favor and being replaced by the modern processed oils.

Meat from animals that are feed grains have unhealthy ratios of omega-6 to omega-3 fatty acids and the reason is simple. Like us, they are what they eat. Omega-3s are formed in the chloroplasts of green leaves and algae. Sixty percent of the fatty acids in grass are omega-3s. When cattle are taken off omega-3 rich grass and shipped to a feedlot to be fattened on omega-3 poor grain, they begin losing their store of this beneficial fat. Each day that an animal spends in the feedlot, its supply of omega-3s is diminished.

Grass fed beef is also delicious and can fit into a tight budget. Check out some of my recent recipes here…

Eggs from pasture raised chickens are also an important part of my diet. When chickens are housed indoors and deprived of greens, their meat and eggs also become artificially low in omega-3s. Eggs from pastured hens can contain as much as 10 times more omega-3s than eggs from factory hens (plus they taste delicious!).

3. Eat a serving of fish at least two or three times a week. 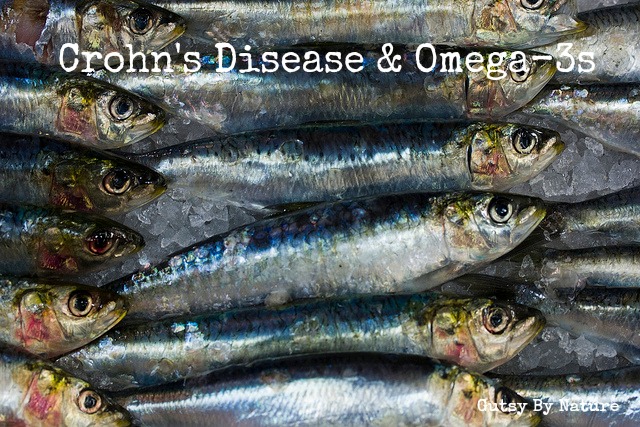 The fish that are highest in omega-3 fatty acids are the ones with the highest amounts of fat. This includes anchovies, wild salmon, mackerel, black cod, whitefish, Pacific sardines, bluefin tuna, herring, and rainbow trout. You can also get moderate amounts of omega-3 from mussels, canned tuna, oysters, halibut, pollock, crabs, shrimps, and scallops. The smaller fishes like sardines, herring, and anchovies are lower in mercury contamination, so I try to prioritize them over the larger fish. Bonus: Many of these fish come to us preserved in cans, so they are not only healthy but also a rare paleo-approved portable convenience food. Look for this brand, this brand, or this brand.

(Disclaimer: I am not a doctor. This information is not medical advice and is for informational purposes only. You should not start or stop taking any medications or supplements without first consulting with your medical care provider.)