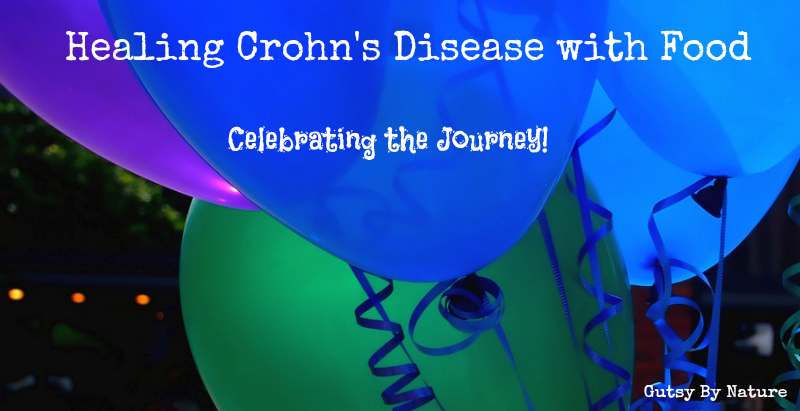 January 22 is like a second birthday for me. One year ago today, on January 22, 2013, I made the life-changing decision to take a shot at healing myself and managing Crohn’s disease through diet. I had read the book Breaking the Vicious Cycle by Elaine Gottschall and was embarking on a 30 day trial of the Specific Carbohydrate Diet (SCD), per her instructions.

I told myself that I would do the 30 days no matter what and if I wasn’t feeling at least a little bit better at that point that I’d go back to my old belief that diet didn’t matter. I’ll confess, those first 30 days were hard. It wasn’t immediately clear that anything positive was happening at all. I lost some weight I couldn’t afford to lose, I had some strange side effects like my skin breaking out, and it was really hard to give up my favorite foods.

But I also saw immediate small improvements in my digestion. My trips to the bathroom started to decrease and my bowel movements were more formed. I began having nights where I didn’t get up to go and instead slept straight through. The dull ache and on-and-off cramping I’d had in my belly for as long as I could remember started to go away. My doctor was pleased with my colonoscopy results and my blood results showed that I was finally turning the corner on the chronic anemia I’d had for years.

I continued on with SCD beyond the 30 days and continued to see small improvements. Eventually I transitioned to a paleo autoimmune protocol (AIP) and saw even more dramatic improvements. Slowly, I was able to add back in many foods so that today I eat fairly close to a standard paleo diet.

How I eat today

The results speak for themselves… I feel amazing! I have energy I didn’t dream of last year. My stomach doesn’t hurt anymore – a state of existence I’d forgot was possible. Aches and pains in various joints are gone and I can’t remember the last time I had a headache. I’m sleeping better too and my visits to the bathroom are far less frequent.

Probably the most exciting part is that I’ve learned to love food again. I’m no longer craving the crap I’m “not allowed” to eat. In fact, I barely give it a second thought. Instead I’m looking forward to every meal, knowing that the whole real foods are going to nourish my body and taste good. I love paging through cookbooks – both paleo and standard – looking for new ideas and ways to prepare both old favorites and new treats. And over the past few months I have enjoyed sharing those new creations with you on this blog, which I started because I thought perhaps someone would benefit from hearing my story. It’s just a bonus that I’ve discovered how much fun blogging is!

In the year ahead, I plan to continue to refine my diet and improve my health. I realize that there is no destination for this journey I’m on. There will always be twists and turns in the path, especially given the complex medical history behind me. But I’m more optimistic about the future than I’ve ever been before and look forward to the adventure of the coming year. Thanks for being part of my journey! 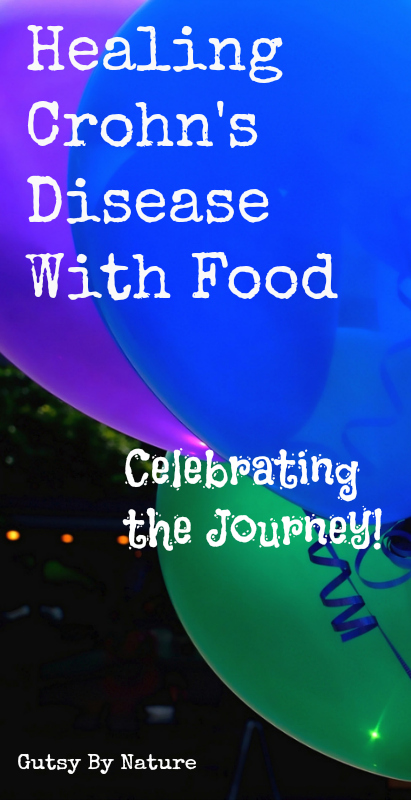 […] by Thomas Dunne Books, 2014. Just a couple months before I ditched grains from my diet in an effort to manage Crohn’s disease, I had discovered the original book these authors, Artisan Bread in Five Minutes a Day. I loved […]

I really enjoyed reading this ! I have two procedures coming up this month to see if I have Crohns or not. As it can be an intimidating and scary process I’ve been looking for encouraging blogs by people facing similar obstacles. Thank you for this and regardless of my diagnosis I will keep returning to your blog :). Stay healthy & happy.

[…] rice and other gluten-free grain flours. A strict Paleo protocol is a very good place to start and that template has really helped me get my health back on track, but baking is something I have always loved. It gives me great joy to get out my mixing bowls and […]

I really appreciate this. I was just diagnosed with crohn’s after years of not knowing what was wrong with me. My first thought was I NEED to change the way I eat. I knew if I did this I could heal my body from within. I know it won’t get rid of my crohn’s but it won’t hurt. I do have a question. Are you on your medication?

Hi i was wondering, i have crohn s disease and currently under medication. Am i supossed to stop with my medication for an good result? I will ask my doktor as well

Definitely do not stop any medication without first consulting with your doctor.

Would like to try this too, but are you on medications too or does just the eating habits alone make you better. I hope you are still doing well. I am new to chrome and trying to research. Thanks

I do take medication. Some people are able to heal with diet alone, but I’m not one of those people. I need both.

With all these things that you don’t eat. It’s hard to picture what you can eat.
Do you have an article talking about that?

Thank you for sharing this! I wish you the best for the future! I’m praying for you!