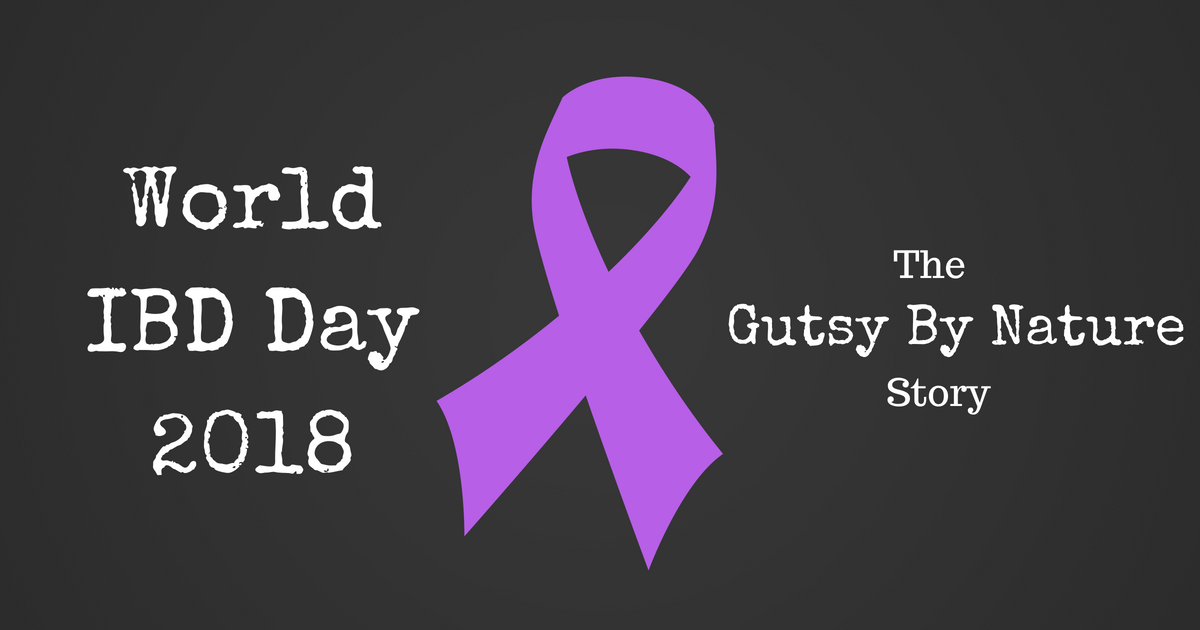 Since I started Gutsy By Nature as a blog in 2013, I’ve written several times about my personal story of diagnosis with Crohn’s disease and healing, but I’ve never actually written out the entire story, from its beginning to where I am today, May 19, 2018. In recognition of World IBD Day, I thought it would be a good idea to actually do that.

I was diagnosed with Crohn’s disease in 1995, just before my 20th birthday, though I had on and off “tummy” issues going back all the way to age 4 or 5. Although I initially expected that I would be told to change my diet, when my doctor said I didn’t need to, I was fine with that. I just wanted to fix the problem and get back to being a carefree college student. So I took the medications and carried on. I was a good student with a very active social life. I graduated, got a job, got a master’s degree, dated, got married… all the while doing my best to just ignore what was happening in my body… until I just couldn’t anymore.

When I was 32 I finally had to face the reality that the constant disease activity in my intestines had caused such significant scarring that I had dangerous narrowing in two places in my colon and had surgery. Unfortunately, my recovery from that surgery did not go well… One of the resected areas started leaking 4 days post op. I was rushed into emergency surgery in the middle of the night and then the other resected area also started leaking and I went septic. I spent almost 2 months in the hospital, much of it in the ICU, barely conscious, as they struggled to get the infection under control. When I was finally well enough to go home I barely recognized myself. I had also been married for less than a year and instead of starting a family like we had envisioned, my new husband became my caretaker. Needless to say, it was a very difficult time in our relationship.

Over the course of the next 18 months, I had four more surgeries, all due to complications stemming back to the very first surgery. For much of that time I could not eat anything by mouth and was unable to return to work, though my Crohn’s stayed in complete remission during this time. In the end, a very skilled surgical team at the Cleveland Clinic finally got me put back together, but I was forever altered – both physically and emotionally.

I regained enough strength to go back to work and excel in a very high stress and competitive corporate job, but various events conspired to trigger my worst Crohn’s flare yet and I became dangerously anemic… to the point where I needed blood transfusions just to stay alive. Drugs were not doing anything at all, not even prednisone and strong immune suppressants.

The moment of insight

That is when I hit rock bottom… but while someone else’s life saving blood was being pumped into my veins, I had a moment of insight. I reflected on the previous 15 years since my diagnosis and realized that the only time I had been in remission and had stayed there for a sustained amount of time was when I was eating NO FOOD.

Food. Could it really be the problem? I immediately started Googling and found something called the Specific Carbohydrate Diet and on January 22, 2013 I went all in. By March I had stopped losing blood, by April I had near normal blood counts, and in May I had a colonoscopy that showed only two minor areas of healing consistent with “resolving Crohn’s disease.” I was so excited I decided to start a blog to share the recipes I was creating and spread the word of my success using natural real food to heal my gut, and called it Gutsy By Nature.

But, I was also weak and underweight no matter how many calories I ate, and extremely depressed, even though I knew I should be feeling happy. I went back to Google, and stumbled upon the Paleo diet and found a couple bloggers who were doing a version of it called the “autoimmune protocol.” None of them had Crohn’s disease, but I thought it was worth a shot, and at the very least would give me some good blogging content! Within days of removing dairy, nuts, eggs, legumes, and nightshades and adding in starches, I felt like a new person. Over time I have reintroduced many foods and discovered others that don’t work for me at all, and others that I can have sometimes but not all the time.

Of course, the road from 2013 to today has not been without its bumps. After taking antibiotics for an unrelated issue, I contracted a drug resistant clostridium difficile infection, for which I ultimately needed a fecal microbiota transplant (FMT). I also started getting kidney stones because of my impaired gut function due to the surgeries, and then most recently I finally saw a rheumatologist about pain I’ve had for over a decade. Blood tests indicated that I am positive for the gene associated with ankylosing spondylitis (HLA B27) though fortunately both x-rays and an MRI show no sign of fusion at this point, for which I give at least partial credit to my diet.

So, there is no “happily ever after” ending to the Gutsy By Nature story. Life goes on, with twists and turns. But it is truly a HEALING story. With taking control of my diet, I regained control of my LIFE. Things didn’t turn out the way I had hoped and planned, but I’m old enough and wise enough now to realize that no one’s life does!

In 2016, I realized that my true calling was to focus full time on helping other people get that same control of their life and became a Nutritional Therapy Practitioner and a Certified AIP Coach in 2017. Then in January of this year, I took the gigantic step of leaving my corporate job behind and made nutrition and health coaching my full time career.

Today, I am healthier than I have been in ages and thrilled to wake up every single day excited to get to work! I thought autoimmune disease was a curse, but it has actually turned out to be a blessing.