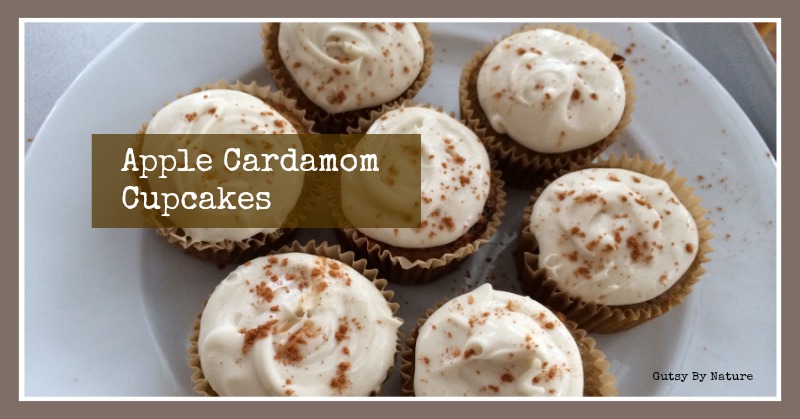 These beauties were originally intended to be apple spice muffins and just a way to use up a partial jar of homemade applesauce that had been in the refrigerator longer than it should have, but they turned out so delicious and moist that I decided they really had to be called cupcakes! The cardamom was a last minute addition and I’m so glad I decided to throw it in because the distinct flavor really makes them them sing.

The cupcakes themselves have actually been baked and hanging out in the freezer for several weeks now while I worked on a dairy free frosting recipe that tasted good enough to be the icing on such tasty cupcakes. My earlier attempts at a coconut cream frosting (described here in my recipe post for naturally red velvet cupcakes) tasted pretty good but had a weird texture, so I was very focused on getting that right this time. I’m still keeping nuts out of my diet, so I decided to stick with coconut milk as the base, so I was intrigued by this recipe from Elana’s Pantry for vegan coconut cream frosting. I made a few changes however, including swapping out the agave nectar for honey (read this post from Real Food Forager on why agave nectar is not a great idea), reducing the amount of coconut oil, and adding some vanilla for flavor.

It was a pretty involved process and took the better part of an afternoon to complete, but completely worth it. As a bonus, the recipe makes about twice what you need for the cupcakes, so I have a large jar leftover in the refrigerator waiting to be slathered on top of whatever goodie I make next!

Make sure you buy coconut milk that does not have added stabilizers and comes in a BPA free can.

Coconut flour can be found in most health food stores, but my new favorite source for all things paleo is the beautiful website Barefoot Provisions. They carry an organic coconut flour that is the best I’ve ever tasted! Click here or on the image below to learn more. Unfortunately this recipe is neither AIP compliant (because of the eggs) nor low-FODMAP (due to the apples). Arrowroot powder is a starch that is not SCD/GAPS legal, so the frosting is not acceptable on those diets, but the cupcake itself is perfectly legal. 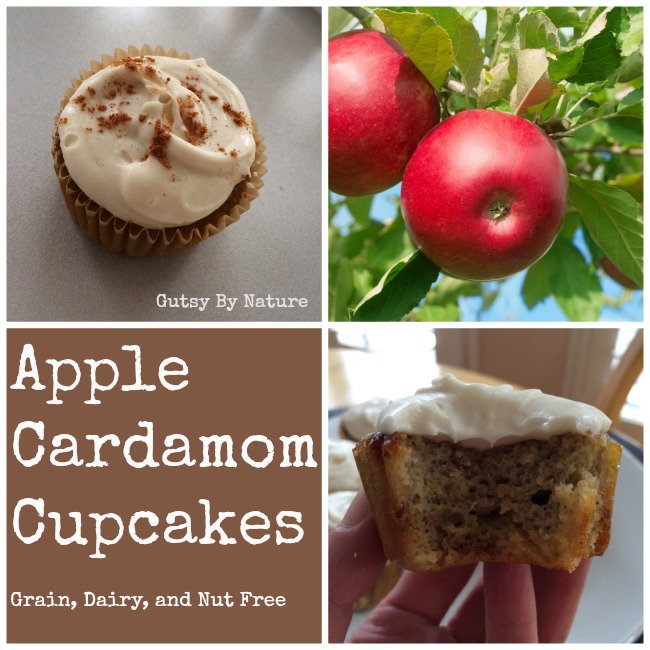 The flavors are great! My icing came out like gooey slime though! I’m not new to paleo baking, I can’t figure out what could I have done wrong?!

[…] me do a happy dance! If ice cream isn’t you thing, I also found a blueberry crumble recipe, apple cardamom cupcakes recipe, and blueberry-mango sorbet recipe, all of which seem like clever ways to get some fruit in […]