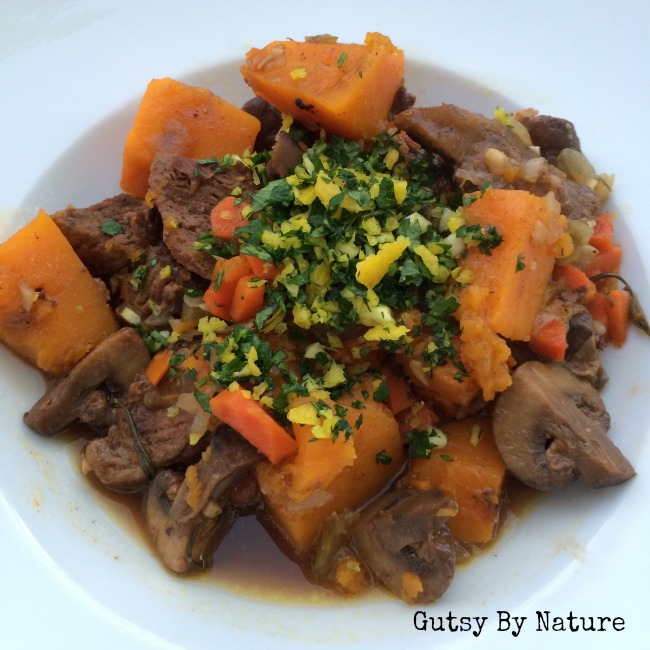 This recipe for cinnamon beef stew with butternut squash and mushrooms is yet another installment in my “grassfed on a budget” series. We get stew meat as part of our grassfed beef larder order, but I also snap it up when I see it on sale at my butcher and toss it in the freezer. Generally speaking, when it is labeled and packaged as “stew meat” it is the trimmed pieces off of roasts. That means you usually get a pretty good deal, but the size will be inconsistent. This doesn’t bother me because it isn’t a big deal to chop the pieces into even sizes as they go into the pan, but if you’d rather control the quality or you aren’t able to find anything labeled as “stew meat” just purchase any of the tougher cuts that contain words like chuck, round, or rump.

On to the recipe… First of all, I must give credit where credit is due. This dish was strongly inspired by the amazing Melissa Joulwan’s recipe for Cinnamon Beef Stew with Orange Gremolata as published in her book Well Fed: Paleo Recipes for People Who Love To Eat. If you don’t already have that cookbook, stop what you are doing right now and click on that link over to Amazon and order yourself a copy! While you are there, also throw her second book –Well Fed 2  – into your cart. I haven’t read that one yet as (it’s on my Christmas list) but the reviews I’ve seen so far suggest it is a winner too.

Melissa was a freakin’ genius here to put cinnamon in beef stew. I can’t believe how it well it works with beef and turns what is usually a comforting but rather bland dish into something truly delicious. I made a few tweaks to mine, most significantly of all adding some more vegetables and deleting some other items so that it meets my paleo autoimmune protocol (AIP) requirements. I also increased the cooking time because I like my stew meat to be really well stewed and falling apart. I highly encourage you to make my version AND try out Melissa’s version some time. I guarantee that you will love them both!

Notes for healing diets: I am pleased to say that this recipe is appropriate for virtually all healing diets without significant modifications. It is SCD legal as written and for AIP you only need to omit the black pepper, unless you are able to tolerate seed based spices. For low-FODMAP you will need to omit the onion and garlic.

Cinnamon, rosemary, and sage give this hearty stew an exotic flavor.

Want more recipes like this? Check out this Winter Vegetable Paleo Recipe Roundup from Like a Normal Person!

15 replies on “Grassfed on a Budget: Cinnamon Beef Stew with Butternut Squash and Mushrooms”

Hi
Can I substitute balsamic vinegar for Applr Cider Vinegar?

Absolutely… I think that would taste delicious!

[…] several other versions, including beef and parsnip stew with marjoram and the incredibly delicious cinnamon beef stew with butternut squash and mushrooms, but both are far fancier than I was looking for this past week. The beef stew with turnips and […]

[…] Cinnamon Beef Stew with Butternut Squash, via Gutsy by Nature […]

I just realized that I forgot to buy the cin sticks. Can I use cin powder?

Yes, I think ground cinnamon would work fine. Try just a 1/4 teaspoon to start and then add more if you want a stronger taste.

What is the nutritional information for this recipe? Did I miss it somewhere?

I don’t generally calculate nutritional information for recipes because content can vary so much depending on the ingredient sources. I also believe we should eat a nutrient dense diet, without becoming overly focused on calorie content and such.

I’m diabetic, so nutritional information is pretty important. I need to track my sugars and carbs.

Then I am sure you are already aware of it, but this is a great site for you to make calculations for everything you eat. http://nutritiondata.self.com/

[…] Cinnamon Beef Stew with Butternut Squash and Mushrooms – Gutsy by Nature: This is one of those stews that gets better the next day, so it’s a perfect meal to double and freeze portions for later.  […]