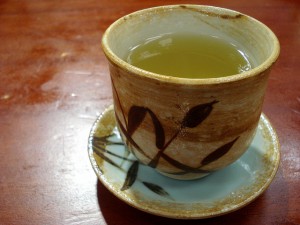 This post was supposed to be a 90-day update when I told you all about how good I was doing on the autoimmune paleo protocol (AIP), reintroducing foods right and left, and keeping my Crohn’s disease totally in check. I even had the draft half written last night.

And then I woke up this morning feeling like death warmed over. I had cramps, nausea, diarrhea, gas… the whole nine yards. Plus my body felt achey, my head was throbbing, and I could barely string together a sentence to explain to my concerned husband what was going on. Thankfully the agony was brief – I took the day off from work and spent most of it day resting and sleeping and am now feeling mostly back to normal. I’m still not sure if it is a flare up of Crohn’s disease, a reaction to some food I ate, or just a bug that I caught.

I ate some simple foods today for sustenance, but mostly stuck to broth and tea and allowed my body to just work out whatever was going on. I can get away with semi-fasting for a day, but I lose weight rapidly if I’m not eating a regular hearty diet and that’s not a good thing, so I have to  get back to regular meals tomorrow even if I’m nervous about what effect they will have on my digestion. So what should I eat when I’m not feeling so hot?

Should I return to a strict AIP elimination diet?

If I could say for sure that this incident was related to a food I reintroduced, then this would be an easier question to answer. Say it had occurred directly after reintroducing something, then the answer would be to eliminate that food again and perhaps others that could provoke an immune response, let the immune system calm down for a few weeks and then begin again.

I have been eating a lot of foods that are eliminated on the strict elimination protocol, including eggs, chocolate, coffee, seed based spices, and some nightshades. However, none of those were new within the last few days. The last major reintroduction I did was tomatoes, but that was a full 7 days earlier so I don’t think that could be a cause at this point. However, it is suspect so I am going to keep tomatoes out of my diet for at least a few days or until I feel 100% back to health. I will also be cautious with other nightshades, eggs, coffee, and chocolate for a while.

What can I add? 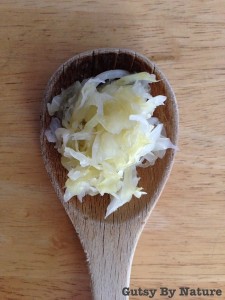 Those of us on elimination diets tend to focus so much on what we can’t eat or what we should take out of the diet that we sometimes forget to pay attention to what foods should be added to help promote healing. Over the next couple days, I will focus more on adding in good bone broth (got a pot started on the stove right now to simmer over night!). Bone broth is rich in nutrients, healing gelatin, and glycine which aids digestion. I think this is one of the keys to making AIP for Crohn’s disease so effective.

I’ll also continue to eat fermented foods, but be cautious not to over do it. Fermented foods like sauerkraut and kombucha contain beneficial bacteria, but I can also be prone to small intestinal bacterial overgrowth (SIBO) so I need to be mindful and aware of symptoms of that.

Healthy fats, especially because I need the dense calorie source when I’m recovering, are always important for me. I get a lot of it from the grass fed and pasture-raised meats we eat, but will also supplement with lard from pastured pigs, coconut oil, and palm oil.

The other food category I need to focus on adding is organ meat, which are a concentrated source of nutrients including vitamins, minerals, more healthy fats, and essential fatty acids. This post from The Paleo Mom makes a great case for why everyone should eat more organ meat, particularly people who are dealing with autoimmune diseases.

What should I NOT eat?

It should probably be obvious that I will continue to stay on a paleo diet and not reintroduce any more foods until I’m really feeling well again, but just to be clear this is my list of “NO” foods.

*When I wrote my last update, I was uncertain how my body did with dairy and I still am. I seem to be fine with the grass fed ghee I’ve been cooking my eggs in every morning and sometimes putting on a sweet potato, but little experiments with grass fed butter or cream have been unclear.

When I am feeling back to full health, I will continue experimenting with what I can safely eat. If you read my 60 day update, you probably saw this chart that I created, based on the recommendations from Sarah Ballantyne (a.k.a. The Paleo Mom). And you have probably noticed that I didn’t follow this order at all! I’ve been eating potatoes and egg whites for two months – both of which are foods she says are most likely to be problematic, but I still haven’t even tried eating nuts and only recently gave small amounts of grass fed butter a try – both of which are way down on the list. 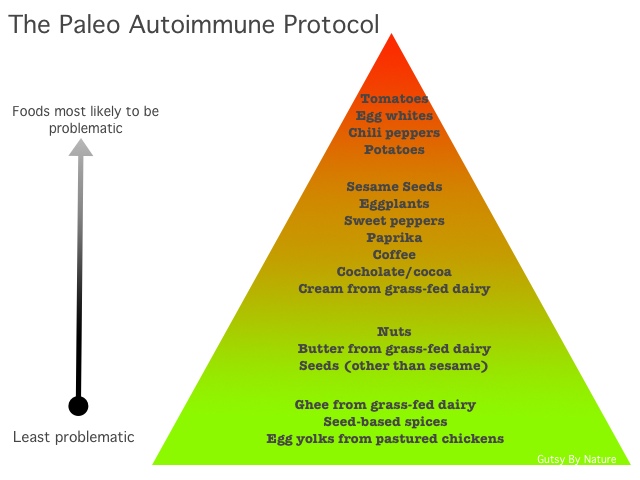 Why did I choose to reintroduce in the order I did? I confess that my system has not been very scientific. Some of it is based on foods that I missed the most (like chocolate) and others that I just had a gut feeling would be good for me to eat (like potatoes). I have held off on nuts and been cautious about dairy because those were the two food categories that I was eating the most of prior to switching to AIP, so I’m most suspicious of them.

Once I’m over this little set back, I will add back in tomatoes and then continue experimenting with dairy.

Read about my experiences with AIP