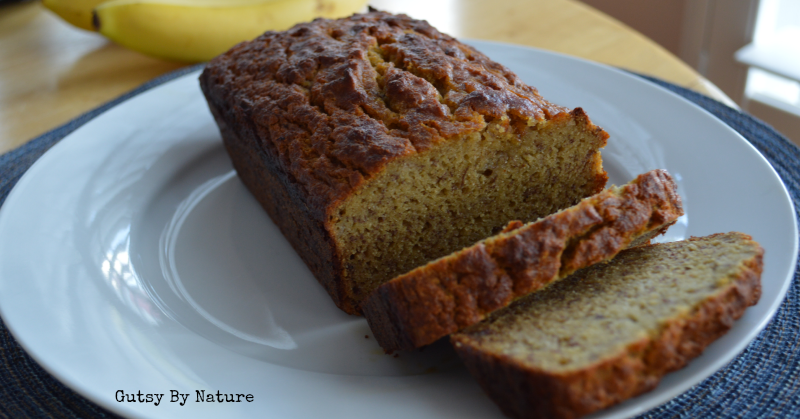 When life gives you over-ripe bananas, what do you do? You make banana bread, of course! I’ve been working on paleo banana bread recipe that also doesn’t use nut flours or dairy for a while, and am pleased to present this recipe. By combining coconut and tapioca flour and adding some coconut milk, it mimics the texture of traditional banana bread beautifully, without being either too eggy or too dry – two extremes that seem to describe many coconut flour baked goods.

Before I dive into the recipe, I have to make a confession. For many years I hated bananas. Detested them. I would even loudly and dramatically protest the smell of them when others consumed them around me. I was even known to have rejected a fruit bowl that included bananas because I was certain the banana flavor had tainted the rest of the fruit. Seriously.

But today I love bananas. I’m not sure exactly how I changed my orientation toward bananas a few years ago, but it definitely started with banana bread. Then I started incorporating bananas into smoothies and eventually reconsidered my entire banana world view and started eating them straight up. It’s a good thing too because they are a staple travel food for me since you can find them on hotel breakfast buffets, in airports, and in gas stations from coast to coast and I can count on them being gluten free since they come in their own natural wrapper!

It all started with banana bread though, so after going grain free I was determined to find a way to bring it back into my diet. There are a ton of paleo banana bread recipes out there and many are very good, but most rely at least partially on almond flour. After eliminating nuts for several months as part of a paleo autoimmune protocol (AIP), I’m now able to eat them in small to moderate amounts, but I still find that almond flour based treats don’t treat my digestive system well – perhaps because of the high amounts of anti-nutrients in almonds that are not soaked or sprouted. Plus, I share concerns that some other bloggers have raised about the high amount of omega 6 polyunsaturated fats in almonds and the oxidation of those fatty acids.

Instead of almond flour, I’ve come to embrace a combination of coconut and tapioca flour. Coconut flour is notoriously “thirsty” on its own; generally requiring 6-7 eggs plus another cup of liquid for every cup of coconut flour in a recipe. I wouldn’t mind using that many eggs if I had a flock of laying hens in my backyard but since free-range soy-free eggs run upwards of $6 a dozen around here,  I cringe any time I think of emptying half a carton into a single recipe! I’ve found that by combining the coconut flour with tapioca flour, you can reduce the number of eggs and end up with a far superior texture. You can buy both flours at most health food stores, but you can also buy them online. I use this brand of coconut flour and this brand of tapioca flour.

Another great resource for “primal flours” is Barefoot Provisions, including organic coconut flour that is made in small batches at low temperature to ensure freshness and quality. Click here or on the image below to learn more and order. 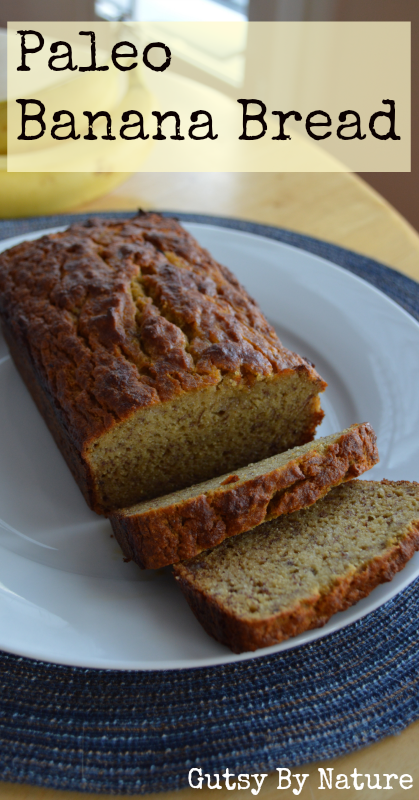 This is a fabulous recipe! I made a loaf and some muffins by doubling the recipe. Thanks so much for sharing 🙂

Making this right now and it smells so good! Can’t wait to try it.
The only thing I didn’t add was the honey because the very ripe bananas are sweet enough!
Thanks for the wonderful recipe =)

Thank you! I agree – if your bananas are very ripe you need very little or no added sweetener.

Can you use arrowroot starch instead of tapioca? I react to tapioca. Thanks

[…] store trips and when the banana goes from just ripe to overripe! I’ve been making a lot of my famous paleo banana bread as well as the indulgent brown butter banana chocolate chip muffins I posted earlier this month, […]

I do A LOT of paleo baking and this is by far one of the best paleo baking recipes I have tried. I love that it is so simple, easy-to-find ingredients and the end result is a moist, delicious and flavorful banana bread. I can’t wait to make it agaim!

Hi! Do you think it’s possible to sub the Palm shortening with butter or coconut oil, or would that change the texture completely? Or do you have a better idea? Live in Sweden and it’s so hard to find a good palm shortening here!

I’m going to try this using almond flour in place of coconut flour (because I’m currently out…) when i made this according to the recipe above it was amazing! Hoping it will be just as good this time!

Hi There, Would this work with Cassava Root flour in place f the tapioca flour?

Does this need to be refrigerated or taste better left out?
Thanks!

Yummy! The recipe worked really well! Ty! I tripled the recipe and cooked it in a 9×13 pan and it didn’t need any extra time to cook. Three slight changes I made was to only put in a third of the sweetener and add nutmeg and extra cinnamon. I actually liked the flavor better after it was cold.
Thanks again,
~LacyGene~

Unrelated to this recipe: The most important thing you can do in your life is to secure your eternity. Read the Bible to make sure you know what God says about it. Here’s my personal summary: Turn away from your sinful ways (lying, stealing, lusting, coveting, self-centered ness, etc.) and give yourself, heart and soul, to Jesus Christ. (He is God in the flesh.) He died in your place to take the punishment for the sins you have committed and will commit. There’s a ton more to know, so take your soul seriously. Stop watching movies and playing games and dig into the Word of God until you have figured it out between you and God. Don’t let anyone deceive you. Go to the source—God and The Bible.
Spoiler alert!!:
YHWH wins. (Get on His side before it’s to late!!)

i make this all the time but i use 1/2 cup melted coc oil instead of coc. milk, 1 stick real butter instead of shortening, and 3-4 tbls. maple syrup instead of honey. and, i put a whole cup of walnuts in it. DELICIOUS!
i am trying to gain weight so wondering if anyone has an estimate of the calories a one-inch slice may have?