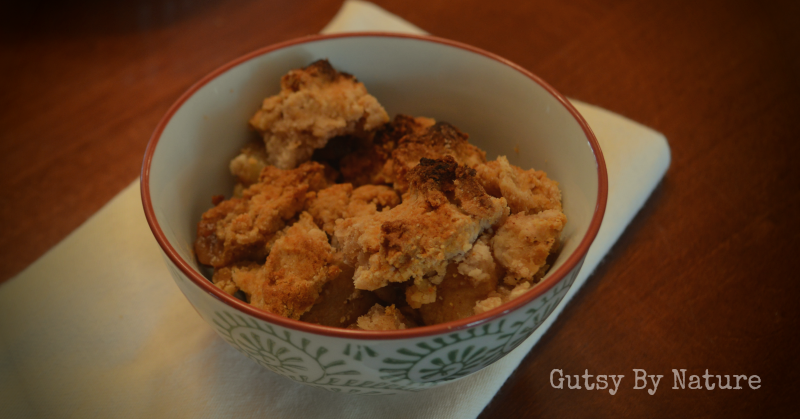 Whether you call it it a crumble or a crisp or “lazy person’s version of apple pie,” you are sure to love this allergy friendly AIP apple crumble and be proud to serve it to anyone, regardless of their dietary restrictions… or lack of! It started out as an experiment that I didn’t really intend to turn into a blog post, but it was such a smashing success at our Thanksgiving dinner that I decided on the last second to snap some pictures. My own notoriously picky eating Mr. Gutsy gobbled it up and declared that I simply had to share it with all of you… so you have him to thank for this recipe!

This recipe is 100% compliant with the paleo autoimmune protocol (AIP) and does not use any of the major allergens. As such, it is gluten-free, dairy-free, nut-free, egg-free, as well as being free of nightshades, soy, and refined sugar.

My apologies to friends who are following SCD or a low-FODMAP diet as this is not compatible with either protocol. During my days following SCD, I loved this recipe for crisp topping. Low-FODMAP folks will need to investigate desserts that use some other kind of fruit, like strawberries or rhubarb.

As with so many of my recipes lately, the key ingredient is cassava flour and my favorite brand is Otto’s Cassava Flour. Happily, this is becoming easier and easier to find – I can even buy it in my local Wegman’s grocery store (hint: it’s with the other “healthy” flours, not in the gluten free section). You can also order directly from the manufacturer on their website (I find that this is usually the best price) or from other online retailers, such as Amazon and ShopAIP.

I used lard that I rendered at home from pork I get from our local farmer so I know it is the highest quality. I do not recommend regular grocery store lard because it will come from factory farm raised pork and will likely include additives, although there are a few companies that are now producing and distributing lard from high quality pork. Two brands I have tried and trust are Epic and Fatworks. Both are available on Amazon and from other online retailers, including Barefoot Provisions.

One note… Mr. Gutsy did say he thought I used a little too much cinnamon, but I rather liked the heavy spice flavor. Obviously personal preference, so keep that in mind.

Whether you call it a crisp or a crumble, or a lazy person’s version of apple pie, I guarantee you will also call it delicious. Your guests won’t believe that it is gluten and dairy free! 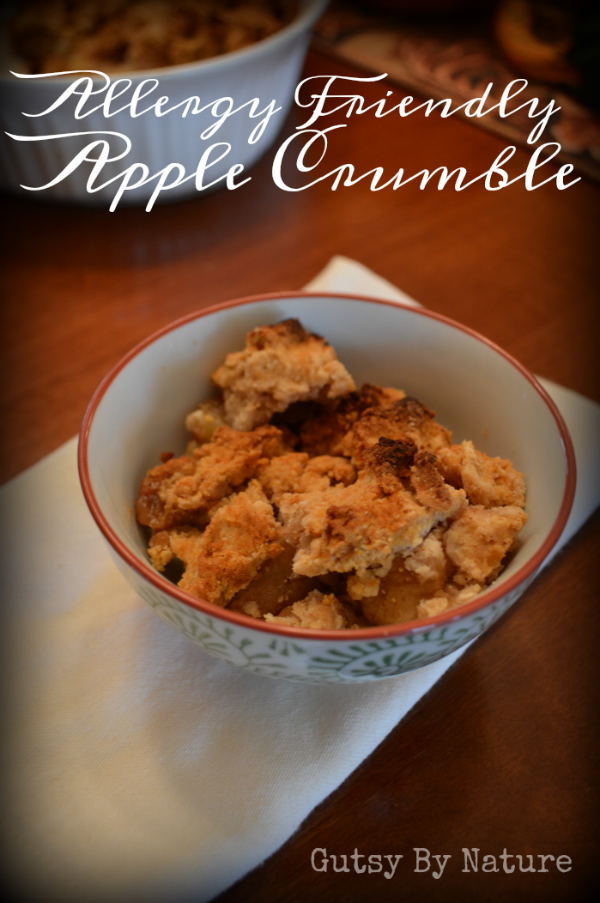 I was looking for something gluten free like this recipe, thanks for the info. I shall try it for myself.