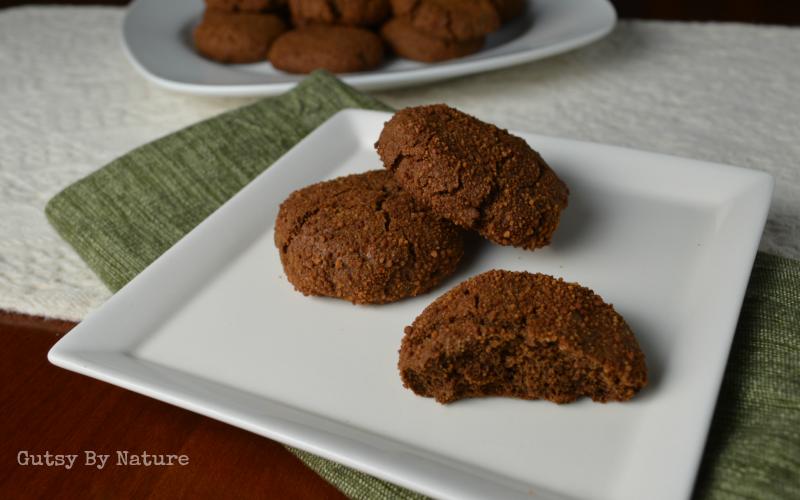 Gingersnaps made with cassava flour? What’s that, you ask? It’s sweeping the world of gluten-free and paleo-friendly baking! You can use it as a one-to-one substitute for wheat flour in most conventional recipes without the need to add any extra ingredients and it has a completely neutral flavor, so it works well in both savory and sweet recipes. The best news of all… it is one of the few grain-free flour options that is acceptable on the paleo autoimmune protocol (AIP)!

What is cassava flour?

Cassava is another name for yuca, which is a root vegetable grown in over 90 countries and is a staple food for half a billion people across Africa, Asia, and Latin America, though mostly unknown to most of North America and Europe. That is beginning to change as creative paleo folks discover the many ways it can be used to recreate comforting dishes (see my post on paleo recipes using fresh whole yuca root here).

Where do I get cassava flour?

You may be able to get it locally if you live in a city with significant populations from African countries, where it may be labeled as “fufu,” or Brazilian populations. More likely, you’ll need to order it online. Amazon carries a few different products they label as cassava flour (linked here for your convenience) but please be aware that I can’t vouch for their quality – the only product I’ve used is from Otto’s Naturals and is what I used to develop and test this recipe.

One word of warning from the folks at Otto’s… other cassava flours often have a fermented sour flavor that can adversely affect the flavor of your final product. Additionally, you should know that Otto’s cassava flour has a much higher fiber content than others on the market, which can affect both glucose absorption rates and baking results.

Note on palm shortening… Palm shortening is a great dairy free and healthy alternative to butter, but you should be aware that most palm oil is NOT sustainably harvested. One exception is the palm shortening from Tropical Traditions, which is now the only brand I trust.

Paleo Gingersnaps... made with cassava flour! 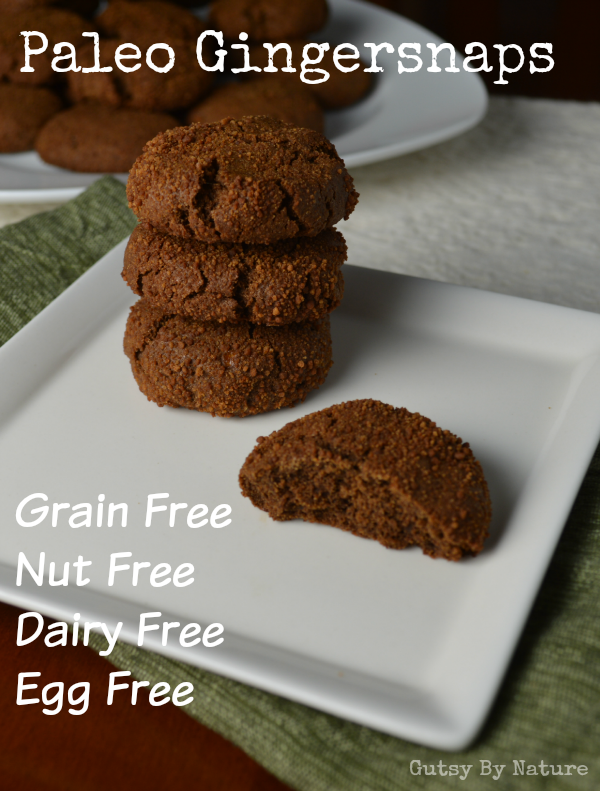 33 replies on “Paleo Gingersnaps… made with cassava flour!”

Just wondering if you encountered any problem with using the coconut sugar. I read on her website where the coconut sugar tends to sink to the bottom and she asked if anyone had solved this problem. Since we use coconut sugar a lot in the little bit we bake sweet goods, I would be interested to know how it works. I like the brand you mentioned and the way they prepare it.

[…] Paleo Gingersnaps… made with cassava flour! – Gutsy by Nature […]

[…] Paleo Gingersnaps… made with cassava flour! – Gutsy By Nature […]

[…] favorite gluten-free flour alternative. So far, I’ve used it to make both sweet treats like gingersnaps and savory dishes like my AIP-friendly fried fish. Unfortunately, you probably won’t be able […]

[…] Paleo Gingersnaps by Gutsy by Nature […]

I really want to try this recipe, and cassava flour, however it costs more than one bag to have it shipped to Canada. I have made my own, and have it ground, but being unfamiliar with it, I don’t know how much I should process it. Can you tell me anything about the texture? Is it more like coconut flour, or finer, like tapioca flour? Thanks 🙂

It has a very fine texture, not quite as powdery as tapioca flour. Probably somewhere in between coconut and tapioca.

You can now order it from a distributor in Ajax; I just did – mine arrives in a few days:

Hmm I tried these and while they tasted delicious, the dry ingredients never really incorporated. Any suggestions for next time? I triple checked all my ingredients but it was still so dry.

I’m not sure what you mean… These are meant to be crispy. If you are looking for something that has a softer texture, you might prefer my newly developed molasses spice cookies. https://gutsybynature.com/2015/12/16/cranberry-molasses-spice-cookies-paleo/

I’m sorry, I wasn’t very clear in my earlier comment. What I meant was that when I mixed the dry ingredients with the wet, the dough stayed very crumbly and didn’t mix. It was hard to form into cookies, but the cookies I got to stay together tasted delicious!

Hmmm…. Maybe try using less cassava flour next time. I have noticed recently that it seems not always to perform consistently. Maybe that is due to variations in batches or in the humidity in the air depending on time of year.

Re saying cassava is low FODMAP –
Monash University tested fresh cassava in March 2016 and found it, in “typical serving sizes”, to be High FODMAP (https://fodmapmonash.blogspot.com/2016/03/research-update-fermentable.html).

Thank you for letting me know about this newer research. I have updated the recipe notes to indicate that.

Have you used any fat other than palm oil?

[…] the first recipe I ever created using my first sample bag of Otto’s Cassava Flour was for these AIP-friendly gingersnaps. Here are a few more of my favorites (be sure to try the “chocolate” chip […]

[…] Natural Cassava Flour. I’ve been working with this flour now for over three years (this recipe for gingersnaps was my first, way back in January 2015) and it is exciting to see that it is now available so […]

These are delicious!! I noticed an earlier comment above stating that their ingredients seemed too dry and didn’t become dough-like. I used my KitchenAid mixer and had it on the stir setting. And at first I thought it wasn’t going to make a dough either due to dryness. But I turned up the speed and that did the trick. I think it would be hard to do by hand, which your instructions say is an option. But I assume you meant hand-held electric mixer, not literally by hand with a spoon? Either way…I am super happy with thtis recipe! Pre-AIP I have had a serious gingerbread problem this time of year, and these are the perfect substitute. 🙂 Thank you!

Will this recipe work to make gingerbread men cutout cookies?

I’m not sure, I’ve never tried. This is a good recipe for cutouts: http://eathealthrive.ca/gingerbread-cookies-aip-paleo/

I love these. Thank you Jaime. Making some for the holidays.