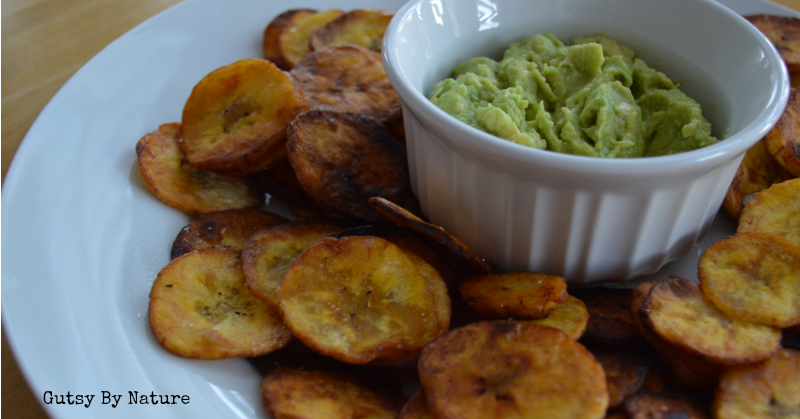 These plantain chips are my paleo answer to an overwhelming desire to enjoy chips and guacamole! I know some paleo people are able to eat organic corn chips and more power to them, I say. Unfortunately for me, corn (along with wheat) is one grain I steer completely clear of because I’ve had allergic reactions to it. In fact, discovering my corn allergy was the early blessing-in-disguise that lead me to start seriously considering what I was putting in my mouth and how it might be affecting my health. Fortunately, after some time of eating a clean paleo diet, I seem to have healed my gut enough that I no longer have allergic reactions to trace amounts of corn, but I’m not brave enough to actually knowingly eat it.

I actually discovered plantain chips in my local health food store during the early stages of dealing with the corn allergy, long before I even know what paleo was. They have continued to be an occasional indulgence (I even used them to make a breading for my yummy paleo chicken fried steak) but I try not to eat them too often since the only ones I can find in stores are fried in vegetable oils I generally avoid consuming for multiple reasons, including their higher omega-6 to omega-3 ratios. Finally it occurred to me that I could make my own, with coconut oil!

Coconut oil is one of the richest sources of saturated fat known to man and that is a good thing! Forget about the whole “artery-clogging” stuff we were previously told – saturated fat is necessary for optimal health. What’s even more important for people like me with digestive diseases is that coconut oil contains a particular kind of fatty acids – medium chain triglycerides (MCTs) – that go straight to the liver and and are an easily accessible source of energy, even when the digestive tract is impaired or injured. Learn more about the benefits of coconut oil here.

Where can I buy coconut oil?

Coconut oil is starting to become more widely available, even in mainstream grocery stores. My favorite brand is available online from Barefoot Provisions – my trusted source for consciously curated paleo and primal foodstuffs. Click here or on the image below to learn more and place an order. These plantain chips have a satisfying crunch and make a great paleo-friendly chips and guac combination! 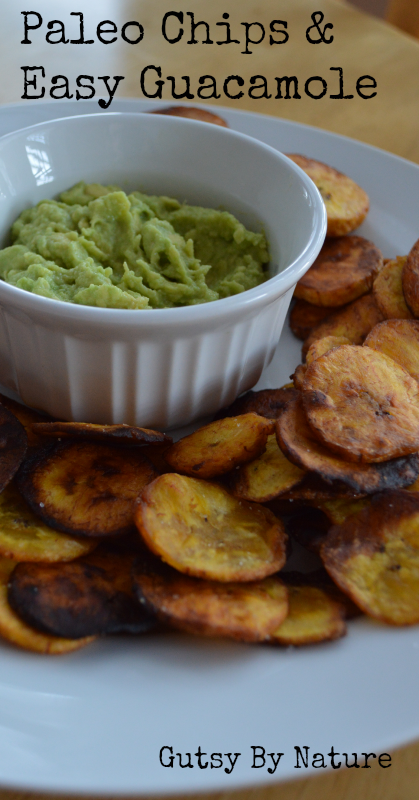 […] Paleo Plantain Chips and Easy Guacamole – Gutsy By Nature – These plantain chips are my paleo answer to an overwhelming desire to enjoy chips and guacamole! I know some paleo people are able to eat organic corn chips and more …… […]

[…] Read the full recipe from Gutsy by Nature here […]

Hey Jamie! Thanks for post these delicious plantain chips 🙂 I’ll have to this soon… one of my favorite combos. I featured these on my Paleo AIP holiday recipe link post!

Hi Jamie!
I just discovered your website and love it! I have been wanting to make my own plantain chips for a while now but have simply been too lazy. Your recipe make me realize that it’s easy! Store bought plantain chips by the Inca brand are my #1 addiction right now but I am very wary about eating too many because of the palm oil. However, upon researching palm oil, many sources site it as being one of the “good” oils to use. It is on many of the “safe” lists, along with oils like olive and coconut. I guess I assumed palm oil was a highly processed vegetable oil to be avoided
(along with safflower, sunflower, and canola) but now I’m confused. Do you have any thoughts on this? I am dealing with some autoimmune issues and am attempting to stick somewhat closely to an AIP diet. Thank you!!!! 😉

From a health perspective, palm oil is a pretty good choice. It undergoes some processing, but it has a good profile and is good for high heat cooking. However, most palm oil is harvested in a very unsustainable way and is quite bad for the health of our planet, so I don’t like eating a lot of it for that reason.

Thanks so much for your response. I had heard that about palm oil being very unsustainable. Good reason not to continue buying it. I appreciate your help!

[…] Plantain Chips and Guacamole  from Gutsy By Nature […]