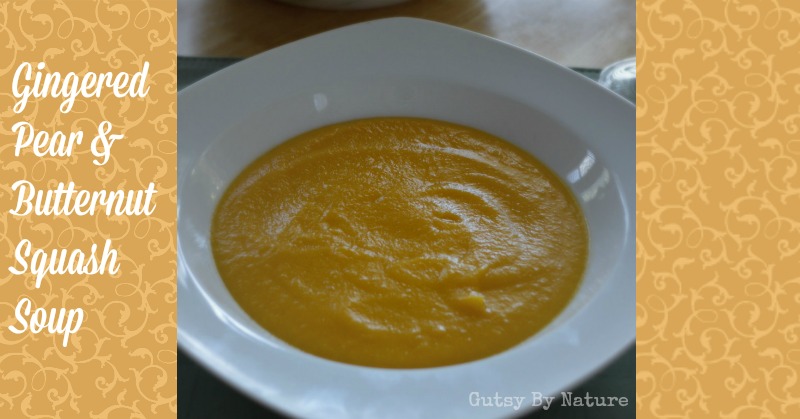 Fall is the season for soup, isn’t it? This recipe for a gingered pear and butternut squash soup embraces the produce of the season and is especially nourishing on cool days. I’ve been eating more soup lately as the weather turns cooler and experimenting with different flavors that please my palate while still adhering to the requirements of the elimination phase of the paleo autoimmune protocol (AIP) since I decided to embark on a what I call an AIP reset.

Regular readers of this blog know that I started my healing food journey well over three years ago now and that I have expanded my diet considerably since then while also using medication to control Crohn’s disease and live with the effects of past surgical interventions. But like the old parable of a frog not realizing he is being boiled alive, I was not noticing (or perhaps choosing not to notice) that while I was enjoying an expanded diet and eating poorer quality foods more and more often, my health wasn’t as good as it had once been. My energy had become uneven and I continued to be anemic despite iron infusions and a correction of other micronutrients – all of which suggest gastrointestinal blood loss. I struggled to maintain my weight, despite eating what felt like massive amounts of foods. And most damning of all, I was starting to have daily episodes of left side abdominal pain – right where I had previously had disease activity and scarring that required surgery. Though I wasn’t in a full-blown and debilitating Crohn’s flare, it was quite troubling.

And I finally decided I had enough.

I needed to DO something, and the only thing that made sense and that I could do right away was change what I was eating. So I decided to go all the way back to the elimination phase of the paleo autoimmune protocol. What does that mean?

In addition to the standard paleo restrictions of all grains, legumes, dairy, and refined sugar, the autoimmune protocol (known by the initials AIP) also eliminates eggs, nightshades, nuts, and seeds. It is the protocol that helped heal me once and I have faith that it will help again… and one week in, I’m already seeing results! I’ve had no pain episodes since the day I started. Still working on everything else and know that Crohn’s disease is a tricky condition, but it is definitely a sign that I’m on the right track.

If you want to learn more about AIP, I encourage you to check out this resource page I put together. One of the big differences between now and the first time I was on the elimination protocol is that there are a TON of awesome resources available now that make eating this way so much easier… and a lot more fun!

Now, on to the recipe…

This delicious soup utilizes the best fall flavors and is completely compliant with the AIP elimination phase and SCD legal. 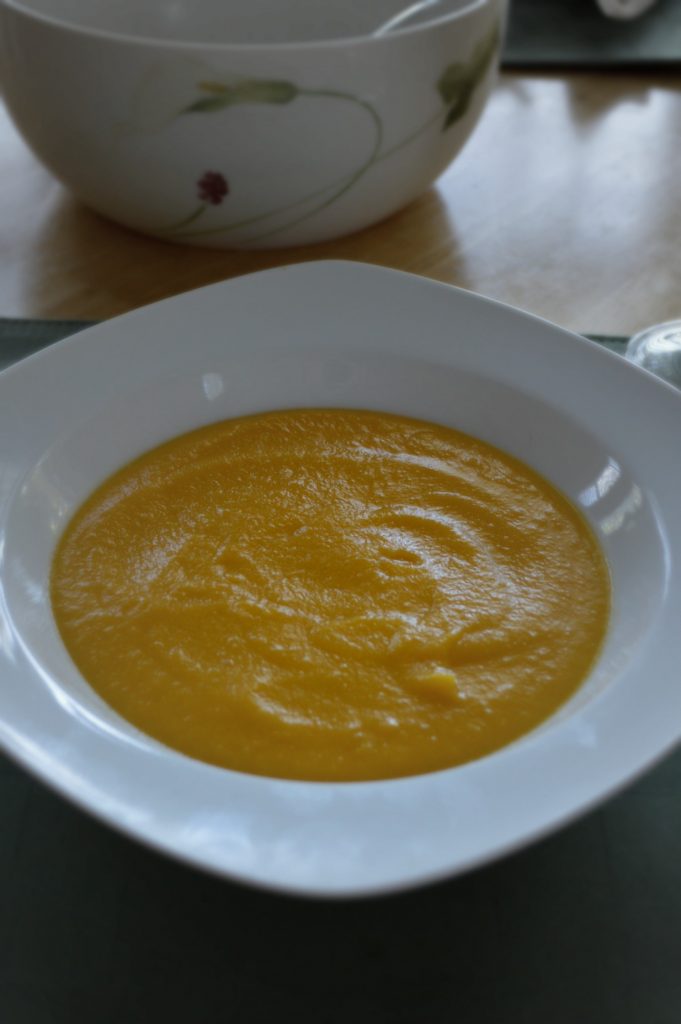 This soup looks so delicious and nourishing! I would love to make it.

I made this tonight with a change and a few additions. Used fresh grated ginger instead of powdered. Added: 2 cloves fresh garlic, minced & sauteed with onions; a few fresh sage leaves chopped & added after the blending step; then, topped each bowl with some leftover ham steak that I cubed and warmed separately. Absolutely delicious! Made it while visiting my mom, can’t wait to make it for my husband. I might saute a few shrimp to top our bowls when we have the leftover soup.

I made this soup tonight with a few changes. I did not have any onion, but I had a container of mirepox (diced onion, celery and carrots) so I use that instead, and I only had two cups of chicken broth, so I added a cup of coconut milk. Then I added some diced pork when it was finished. Really good!

I just made this in 10 minutes. I sauted a shallot, added a pear my Pilates teacher gave me today and threw in some Kobucha squash I had already roasted. I added my turkey bone broth, ginger and salt and blended well. This soup was so filling and tasted exceptional. Wonderful, easy recipe!

[…] Gingered Pear and Butternut Squash Soup from Gutsy by Nature […]